Democrats and Republicans faced off for the first time in this presidential race — at least in the race for TV viewers.

Which party did you watch? Doesn’t matter. Your friends at TheWrap had you covered with a roundup of the best comments, analysis and feedback from across social media.

Here is the complete timeline:

4:57: People are psyched for the town halls tonight.

Another Town Hall tonight…..got the rest of my night planned! Excited to hear what the candidates have to say. #cnnTownHall

#cnnTownHall Love this format rather than the debates

Atheists are watching too…

The second part of the #cnnTownHall is tonight with Jeb Bush, John Kasich, and Donald Trump. Starts at 8pm ET. #AtheistVoter

Some are ditching the town hall for a real circus…

oh my god another #GOPTownHall #GOPDebate why why the world is killing our minds with such #idiots please god why!!!!

Quick no thinking , do we need a wall ?

5:09: During last night’s town hall people were having fun with #AndersonCooperQuestions. Some want to see what questions he’ll come up with tonight.

New: A suit challenging Ted Cruz's eligibility to be President will be heard TOMORROW by a court in Chicago. That was fast.

5:20: People are getting impatient…

5:24: Things get heated backstage as Bush spokesperson takes a dig at Trump…

Another possibility. Lots of time required in hair and make up

5:32: Apparently CNN is a half hour late because according to Cooper, the network is “waiting [Kasich’s] arrival.”

But some have other theories…

5:41: Kasich is up first. Says he likes this so much better than a debate. Hopes tonight he’ll do OK. He’s asked about a recent town hall where he hugged a supporter going through a tough time who asked for a hug from Kasich and got one. Kasich called it an “extraordinary moment.”

Did they just introduce John Kasich as the son of a mailman? Is that supposed to attract the excited dog vote? #GOPTownHall

Would it have killed Kasich to wear a tie? Then, after Cooper says, "Good to see you here." Kasich says, "do I have a choice?" #GOPTownHall

Kasich story is moving. Could not hear pin drop in hall #cnnTownHall

@JohnKasich For what its worth. No matter how this election turns out, you're a big winner in my book. #NothingButClass #GOPTownHall

Kasich says hearing people's stories has changed him and slowed him down. "Sometimes you gotta sit with them and cry." #GOPTownHall

6:02: Kasich on stopping violence against women: “We have to have a war against that.”

6:05: Sanders is asked about Apple fighting a court order to help the FBI unlock the iPhone of one of the San Bernardino terrorists. He says it’s “complicated.” On the one hand, he’s “very fearful, in America, of Big Brother,” but he also worries about our civil liberties. He ends by saying we should find a middle ground between fighting terrorism and protecting individual rights.

6:07: Kasich on violence against women:

6:09: Sanders has a great response to a question about Clinton’s line that’s he’s a “single-issue candidate.” Says Clinton should come hear him cover 20 topics in rallies.

6:20: Sanders said he wasn’t looking for a fight when he criticized Bill Clinton.

“I was asked to comment on Bill Clinton’s very strong criticisms of me,” Sanders said. “I didn’t go around attacking Bill Clinton.” He praised Clinton, saying he did a good job overall as president.

6:26: Kasich ends his session with an emotional story about his parents’death and how it changed his life.

6:27: Watch Sanders respond to the question: Do you consider yourself a feminist?

.@BernieSanders: Too many young people have incurred police records for possession of marijuana. #DemTownHall https://t.co/eO4TRIhj7l

6:35: Jeb compliments his mother before getting choked up talking about his father.

6:40: Sanders: We can’t forget about the veterans…

6:44: Jeb gets emotional about his father…

#BernieSanders #bernie is killing it tonight at the #MSNBCTownhall

6:52: Whoa! Jeb says he “probably would” nominate a Supreme Court Justice if he were in Obama’s position.

7:00: Diaz-Balart tells Sanders that when Latinos hear the words “Democratic socialism,” they tend to think of the authoritarian regimes in Cuba and Venezuela.

7:03: Jeb talks addiction, including the “devastating” effects of marijuana. 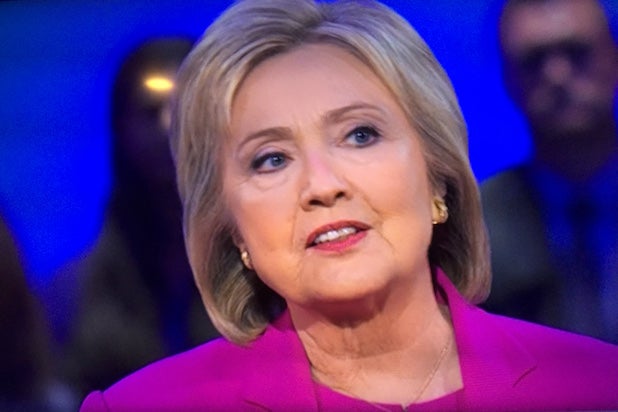 7:09: Clinton says while she did vote against the confirmation of Justice Samuel Alito, she at least voted. She says Congress should do its job.

7:13: Clinton is asked about Apple’s refusal to access the phone of the San Bernadino terrorist. “Of course law enforcement has every reason to want to get information off of a killer’s cell phone… And they’re asking for help.” She said she understood why Apple “is worried about opening the door,” that would allow other countries like China, Russia and Iran to demand the same. She calls it a “hard dilemma.”

She then called on the government and great tech companies to “figure out what is the path forward.”

7:15: Trump is up, already talking about Pope Francis.

Trump: "I don't like fighting with the pope, actually." #GOPTownHall

7:20: Trump defends Marco Rubio… in a very Trump way. He says that Rubio is really not as short as he seems in the picture that surfaced Thursday, where the Florida senator is shaking President Obama’s hand — an image that caused a stir on the campaign trial. Adding to the buzz: It turned out to be a fake. The Photo appeared in the new Cruz campaign website www.therealrubiorecord.com.

According to Trump what bothered Rubio about the photoshopped pic wasn’t the dirty politics or even the fact that he’s made to look like an Obama fan.

Nope. Trump says Rubio is upset about because he looks short in it.

“That was the thing that probably bothered him the most … he’s not too big, but he’s not that small,” Trump says.

7:32: Clinton is asked by Sanders supporter if she would release transcripts or audio recorders of her speeches to financial institutions, Clinton said she would… when everyone else does.

“I was a candidate who went to Wall Street before the crash,” she says. “I went to them and said you are wrecking our economy.”

But the questioner shoots back,”Please just release those transcripts so we know exactly where you stand.”

"A lot of people think President G.W. Bush lied about Iraq's WMDs. Am I one of those people? Maybe. Who can say?" -Trump #GOPTownHall

7:54: The Trump portion is wrapping up with the “personal” questions, starting with his sister being called a “radical pro-abortion” judge by Ted Cruz.

Trump also just says he eats at McDonald’s sometimes. “The food is good, I eat it very carefully.”

I would like to have McDonald's breakfast with @realDonaldTrump #GOPTownHall

The other night I had Kentucky Fried Chicken; not the worst thing in the world. -@realDonaldTrump #GOPTownHall

7:56: The audience did not like this… Clinton gets booed.

.@realDonaldTrump: "By the time the war started, I was against the war." https://t.co/AvdmOvu5pT #GOPTownHall https://t.co/PqMlpJrM3Z

7:59:  Trump’s biggest fault… he never forgets, “which sometimes isn’t a bad thing.” So, his biggest fault is actually an asset. Confused? So are we.

.@realDonaldTrump on his biggest fault: "I hold on too long and I never forget" https://t.co/cIh4VXPqDg #GOPTownHall https://t.co/eGw562Q2oK

@JohnKasich #Kasich was incredible speaking at the @CNN #GOPTownHall. He offered solutions, not political rhetoric.

.@realDonaldTrump came across as surprisingly humble & human in last 10 mins. of town hall with @AC360. Not usually part of his repertoire.

we leave you with these words by Clinton:

And if you still haven’t had your fill of politics… you may want to consult a specialist about that. In the meantime… here are some of TheWrap’s breakout stories of the night:

Also Read: Donald Trump: 'I Don't Like Fighting With the Pope'