When Martin Lawrence needed someone to play the aptly named Hustle Man on his breakthrough ’90s sitcom “Martin,” he turned to Tracy Morgan, a brash young comic starting to make waves in African-American standup venues and on TV. Morgan, Emmy-nominated last season for his supporting role on “30 Rock” and author of the just-published memoir “I Am the New Black,” played the recurring character six times over a two-year period, using it as a launching pad for his career.
Morgan spoke with Eric Estrin about the perfect audience, his in-utero obsession with comedy, and the night Chris Tucker didn’t show up. 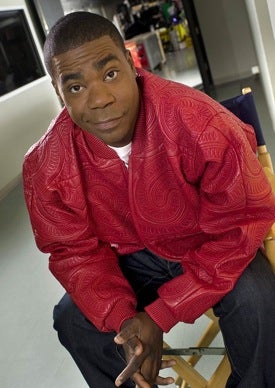 I started in 1968 when the sperm hit the egg. Show business is not something that you can think about doing. I didn’t have a choice in this. I’ve been funny my whole life.
I started performing being in the right place at the right time in Harlem. I was on the street corner making my friends laugh, and prior to that one of them went to a comedy club down on 125th Street and he said, "Yo, you ever heard about the Uptown Comedy Club?" I said, "I ain’t heard about no f—ing Uptown Comedy Club," and he took me there. And my career began from that point on, and I ain’t never looked back.
I was in there on a regular basis. I was mopping the floors, I was living in there. I would take time out to go home and see my wife and my kids, but I was obsessed with comedy.
My start was no different than Bill Cosby or the “Ed Sullivan Show” and all those things. I went through channels like that — “Def Jam,” “Uptown Comedy Club,” the Apollo, “Apollo Comedy Hour.” I guess people was watching the TV show.
I could tell you the very first time I made an appearance. It was on the “Uptown Comedy Club.” Chris Tucker missed his plane coming to New York to do the show, and the producer looked around … I was one of the club favorites, and he looked around and he said, "Hey, yo, you got seven minutes, kid? You wanna be on TV?" And I said "Hell, yeah."
And that was it. I did seven minutes of my best material. All I had was seven minutes.
I started off getting $25 a gig, and that was enough for me to feed my family, buy some cereal and chill. And then more and more I started getting better and better. I was taking what I did very seriously. I knew it could be very lucrative. I knew there were people out there making zillions of dollars doing the same thing I was doing, and I wanted to be one of ‘em.
The next step for me was Martin Lawrence calling me. One day he called me and he said, "Do you want to be on my TV show?" And I said, "This ain’t Martin Lawrence." And he said, "Hell yeah, it is!" Then that night, he flew me out.
Martin Lawrence was the first one to put me on the national stage, doing a character, and it was called Hustle Man. Yeah, it was pressure, but he taught me, Don’t focus on the 10 million people watching, focus on the people in here. Have fun with the people in here and then it will spread to the people at home.
It was some of the best times of my life. I got to work with one of my favorites, my dude. Martin Lawrence was the one who really mostly inspired me. And it just made my confidence go up. He taught me so much about stage direction. He taught me about acting. He taught me how to hit my marks, how to memorize my lines, he told me not to be afraid to make mistakes.
Some of the mistakes are the funniest stuff that ever happened. To err is human. I err every day. People get caught up in trying to be perfect all the time and that’s when they fall apart. That’s when they crumble.
Most entertainers, they focus on trying to get the perfect audience. Nah, people in the seats is the perfect audience. That was it, from there. I just went all out.
Martin Lawrence had the funniest show on TV. That and “Married With Children” at the time. So he put me in front of the world. That was my first real time being on a TV show. And then people started to know me for Hustle Man. They would call me Hustle Man.
Then when I got onto to “Saturday Night Live,” it was an opportunity for me to be at the Update desk and say, "Hi this is Tracy Morgan." That’s how you become a household name. That’s how Chevy Chase did it.

That was a part of my decision of being Tracy Jordan on “30 Rock” instead of Booboo Jordan. I didn’t want to go through airports for the next two years and people are calling me Booboo.