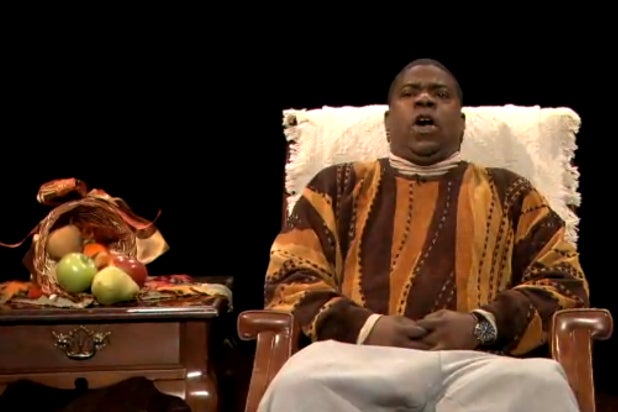 Is anyone better than Tracy Morgan at just reeling off nouns?

The comedian began with some of the more obvious ones: turkey, stuffing, mashed potatoes, cranberry sauce. But the cornucopia of holiday-themed items got more random from there.

On his list, Morgan included, “Native Americans showing up to dinner with no pants on.” Adding, “That’s fucked up.”

Morgan’s take on the Macy’s Thanksgiving Day Parade: “You better keep that Snoopy balloon away from Underdog, or he’s gonna try to sniff his butt!”

And finally, there was this, err, gem: “Last year it was crazy, my neighbor came over and passed out on my futon,” Morgan said. “He unbuttoned the top button on his pants and we all saw his pubes.”

Yeah, Tracy Morgan is an acquired taste. Happy Thanksgiving everyone!