“Transformers: BotBots” is coming to Netflix next month. The animated series will launch on March 25, the streamer announced on Wednesday.

Along with the premiere date, Netflix released a first look at the franchise’s first comedy series, which gives a glimpse at some of the shenanigans that the toys will be getting into.

When a mall is hit with Energon, everyday objects from the food court, the hardware store and other locations, spring to life and convert into tiny Transformers robots called BotBots.

The toys formed squads based on the store they came from, but not every ‘bot was in their correct store when they came to life. By day, these BotBots hide quietly on mall store shelves but at night, they jump headfirst into adventure until a misfit group of BotBots called The Lost Bots run into the mall security guard and put all the ‘bots in danger. Will these misfits be able to overcome their differences, defeat the security guard and gain acceptance in the eyes of the other bots? 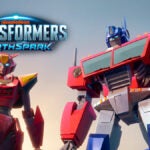 “Transformers: BotBots” is based on a popular toy line with Hasbro, released in 2018. The BotBots are 1”-tall collectible characters that can change from an ordinary object into a little robot in “just 3-5 easy steps,” per the manufacturer.

There are currently two “Transformers” projects also in development at Paramount+.