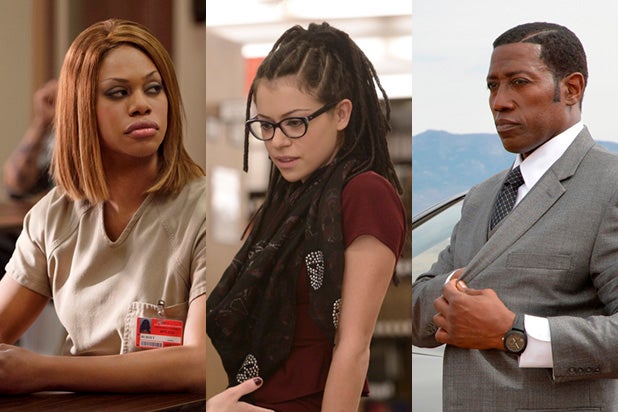 Transgender characters are flourishing on streaming services such as Netflix and Amazon, but have yet to make inroads on broadcast television, a new report from GLAAD revealed.

The newest installment of the organization’s annual Where We Are on TV study, released Tuesday, found that 7 percent of regular and recurring characters on scripted series from streaming services for the current television season identify as transgender — versus 2 percent for primetime cable television and zero for broadcast primetime.

“When you think about the audiences that streaming services are trying to attract and how they are trying to form heir own content brands, it makes a lot of sense that they would want to tell stories that are being under-served by traditional content providers,” Matt Kane, GLAAD’s director of programs for entertainment and media, told TheWrap.

This is the first year that GLAAD has included streaming services in its annual report on TV’s onscreen diversity.

Kane told TheWrap noted that Amazon, Netflix and Hulu “have taken up so much bandwidth in the media and such a prominent role in some of the most celebrated programming.” Tambor, for example, won an Emmy Award in September for “Transparent” playing a transgender woman who comes out to her family.

Broadcast networks fared better in terms of representation of gay, lesbian and bisexual characters. Out of 881 series regulars counted for the current broadcast season, 35 were identified as LGB — 4 percent of the total, up from 3 percent in the 2014-15 season. Another 35 recurring LGB characters were also identified on broadcast.

Broadcasters showed even larger strides in racial and ethnic diversity. Thirty-three percent of characters this season were identified as people of color, up from 27 percent last season.

Much of that growth was thanks to NBC, which boasts 41 percent people of color among series regulars, thanks in part to midseason series “Hot and Bothered,” “Superstore” and “Shades of Blue,” each of which features a female Hispanic lead. Last season only 29 percent of NBC’s series regulars were people of color.

On cable, GLAAD counted 84 LGBT characters, up from 64 last season. That growth is largely attributable to the continued increase in the number of hours of original scripted cable programming — the phenomenon that prompted FX chief to warn this summer of a “too much television” content bubble.

Asked whether LGBT cable characters’ ranks were growing because of an overall increase in the number of characters or because networks were programming specifically to under-served audiences in an attempt to stand out from the clutter, Kane said, “Both of those factors influence how many LGBT characters end up on cable.”