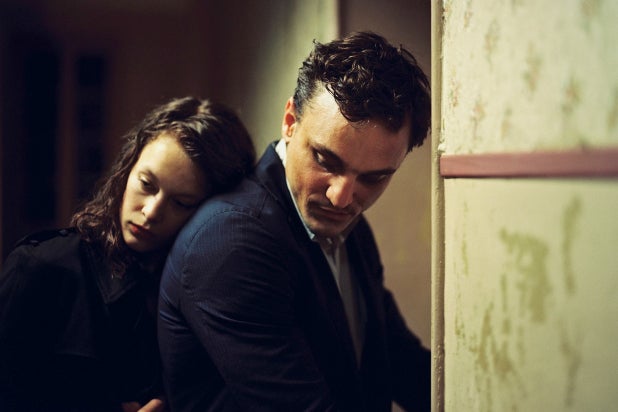 Take “Casablanca,” remove all the fun parts, and set it in the present day. It’s not such an odd idea. In Christian Petzold’s “Transit,” it feels eerily natural, and that’s both horrifying and fascinating.

“Transit” stars Franz Rogowski (“Happy End”) as Georg, a man asked to deliver mail to a writer in the midst of a contemporary fascist regime, during a violent purge of immigrants called “Spring Cleaning.” But when Georg arrives with the mail, he discovers the writer, Weidel, is already dead. He killed himself after, as his letters suggest, the rejection of his latest novel and the rejection of his estranged wife.

Georg is then asked to help another, wounded man travel to Marseilles, where that man can reunite with his family and leave the country, but the perilous journey leaves him dead too. With no plan, no friends, and no hope, Georg tries to turn in Weidel’s final manuscript to the Mexican consulate for a finder’s fee, only to get mistaken for the author himself and to receive his exit visas.

All Georg needs are, in classic “Casablanca” fashion, letters of transit that will allow him to visit each port where the ship will dock en route to Mexico. The bureaucracy takes time, and in that time Georg worms his way into the lives of Weidel’s wife Marie (Paula Beer, “Frantz”) — who has heard her husband is in town, and assumes he’s alive — and the son of the dead man who accompanied Georg to Marseilles.

Everyone Georg meets is in transition. Everyone has a story to tell. Everyone is going to die if they can’t get out of town. But only Georg has tickets, and he has only two of them.

“Transit” is based on a novel written in 1944 by Anna Seghers, inspired on her own experiences fleeing the Nazi occupation of France. Writer-director Christian Petzold (“Phoenix”) has transposed her novel to the present day, in the midst of a non-specific fascist uprising in Europe. The political messaging inherent to such a creative decision is obvious but effective, keeping Seghers’ work alive as a rich and relevant cautionary tale.

Devoid of pretty speeches and old-fashioned melodrama, “Transit” is a hellish little misery of a movie. That’s a compliment. Weidel’s last, unpublished manuscript describes hell as perpetually waiting for a bureaucracy to notice you, and Petzold’s film sensitively dramatizes the frustrations and anxieties that infect the film’s characters. Everyone who successfully flees tyranny leaves somebody behind. Nobody could possibly succeed in a story like “Transit” without living the rest of their lives in shame.

So they take pride in their little moments, short dinners, and games in the street. And every single one of those momentary diversions only underscores just how dire their situation is. “Transit” is probably the only movie based on a World War II novel to include a pointed reference to the plight of the zombies in George A. Romero’s “Dawn of the Dead,” who keep going to the shopping mall even though they’re already deceased.

Aside from a few modern references, and the make and model of the cars, you’d be forgiven for thinking “Transit” was still a period piece. The plot makes little use of modern technology, and the surroundings are all empty of modern conveniences and distractions. The production design by Kade Bruger (“Phoenix”) and set decoration by Aurelie Combe, working in tandem with natural, classical lighting and framing by cinematographer Hans Fromm (“Phoenix”), depict a Europe that has physically regressed along with its politics.

The characters are alive today, but they live in the past, and the simple fact that Seghers’ story about people trapped on the edge of a world teetering into institutionalized evil feels like it could — with a few minor adjustments — have been written right now would have been frightening enough. But the potent and complicated performances by Rogowski and Beer make “Transit” feel less like an exercise and more like an invaluable text, a universal depiction of cyclical misery in which are all either mired or blindly about to enter.

“Transit” lacks the pulpy punch that Michael Curtiz gave to “Casablanca,” so it’s unlikely to “please” any crowd. But it always feels seductively dangerous, as though making it might have been an act of political defiance, and watching it could, with only a few horrible changes to our current political climate, be against the law. The film’s empathy for the unwanted, its frustration at the system, and its uncompromising depiction of people trying to do the right thing when fate clearly has other plans, registers with real power.