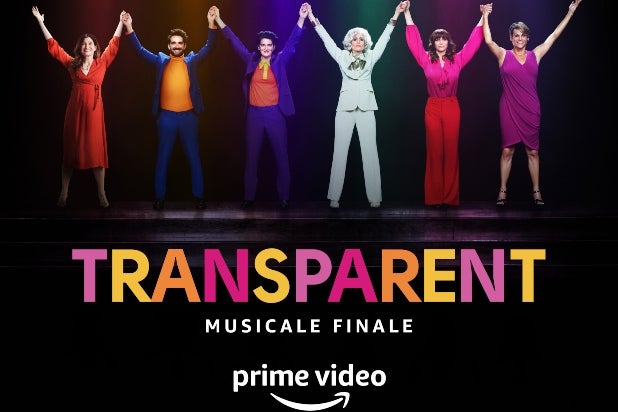 The “musicale finale” of Amazon’s series “Transparent” will make its world premiere as part of the Tribeca TV Festival this fall, Tribeca announced as part of the festival’s lineup Monday. It will be followed by a conversation with executive producers Jill Soloway and Faith Soloway.

Several new series are also making their premiere as part of the annual festival now in its third year, including Hulu’s “Looking for Alaska,” the Starz true-crime documentary series “Leavenworth,” the EPIX drama “Godfather of Harlem” starring Forest Whitaker, the BET+ remake of the comedy series “First Wives Club,” the CBS series “Evil” and a spinoff of “Riverdale” for The CW called “Katy Keene” starring Lucy Hale.

The premieres of the new seasons of shows including “Goliath,” “Room 104” and “Bless This Mess” are also screening as part of the festival.

The festival will also host a 25th anniversary celebration of “Friends” along with a post-screening conversation with executive producers Marta Kauffman, David Crane and Kevin Bright. Other Tribeca Talks featured as part of this year’s festival include chats with Hasan Minhaj and James Spader.

“We’re returning this year with a lineup that highlights the ever-changing ways audiences consume television. Featuring selections from classic cable networks, to premium cable, to streaming entertainment, the Festival will always highlight the best storytelling in the medium,” Paula Weinstein, EVP of Tribeca Enterprises, said in a statement.

“This year’s Tribeca TV Festival program, like TV itself, has something for everyone. We are bringing channel surfing to the big screen, as our audiences can experience- in just 4 days- the full spectrum of episodic storytelling; and we hope, discover their new favorite show along the way,” Cara Cusumano, Tribeca’s festival director, said in a statement.

The Tribeca TV Festival takes place Sept. 12-15 at Regal Battery Park in New York City. Tickets are on sale now. Take a look at the full lineup below:

After making the move from big city New York to rural Nebraska, newlyweds Rio (Lake Bell) and Mike (Dax Shepard) are getting accustomed to their new life as farmers. From neighborly feuds to a house full of chickens, Rio and Mike’s marriage and sanity are put to the test as they try to make the most out of their new life on the farm. Co-created by Liz Meriwether (New Girl), get an advance look at the hilarious Season 2 premiere, directed by co-star and co-creator Lake Bell.

After the Screening: a conversation with co-creator and star Lake Bell, and co-stars Dax Shepard and Pam Grier.

The highly anticipated new series from Robert and Michelle King (“The Good Wife,” “The Good Fight”), “Evil” finds a skeptical female clinical psychologist as she joins a priest-in-training and a contractor as they investigate supposed miracles, demonic possession, and other extraordinary occurrences to see if there’s a scientific explanation or if something truly supernatural is at work.

From Tracy Oliver, the co-writer of “Girls Trip,” comes a modern television remake of the classic 1996 revenge comedy “First Wives Club.” After neglecting their friendship, best friends Ari (Ryan Michelle Bathe), Hazel (Jill Scott) and Bree (Michelle Buteau) reunite to help each other through rough patches in their lives. Together, they navigate music superstar Hazel’s tabloid-ridden divorce, campaign manager Ari’s unsatisfying marriage to her political candidate husband, and orthopedic surgeon Bree’s cheating husband. Tired of always being the ones to make sacrifices in their lives, Ari, Hazel and Bree vow to prioritize their friendship and, along the way, the women learn that as long as they have each other, there’s nothing they can’t do.

After the Screening: a conversation with creator and executive producer Tracy Oliver and star Michelle Buteau

Bumpy Johnson (Forest Whitaker) returns from Alcatraz after an eleven year absence to reunite with his family and reclaim his Harlem territory from Italian mob boss Vincent “Chin” Gigante (Vincent D’Onofrio). He finds an unlikely ally in his old friend Malcolm X (Nigel Thatch). From the creators of “Narcos” and starring Academy Award®-winner Forest Whitaker, don’t miss this early look at your new historical crime obsession.

In the third season of “Goliath,” the unexpected death of an old friend leads Billy McBride (Billy Bob Thornton) to take a case in the drought-stricken Central Valley where he comes face-to-face with a new Goliath: a billionaire rancher (Dennis Quaid) and his sister (Amy Brenneman). As Billy and his team pursue the truth, old enemies and personal demons resurface, forcing him to confront his own mortality.

From Executive Producers Ahmir “Questlove” Thompson, Tariq “Black Thought” Trotter, Alex Gibney, and directors Erik Parker and One9, this documentary series focuses on six groundbreaking songs pivotal to the evolution of American music and culture. The premiere of episode 2, featuring Kendrick Lamar’s “Alright,” brings artists, collaborators, and other influential musical and cultural figures together as they deconstruct and examine the impact the song had on them personally, while dissecting the socio-economic and cultural conditions that inspired the landmark work and gave voice to a generation. In addition to Thompson, Trotter and Gibney, this project is also executive produced by Shawn Gee, Stacey Offman, Richard Perello, and Shea Serrano. Angie Day, Erik Parker and One9 also serve as co-executive producers.

After the Screening: a conversation with executive producer Michael Grassi, and cast members

From executive producers Paul Pawlowski, David Check, and Academy Award®-winning filmmaker Steven Soderbergh, comes a controversial true-crime story playing out in the military justice system. Clint Lorance is serving a 19-year sentence for murder at The United States Penitentiary, Leavenworth. While deployed in Afghanistan in July 2012, the former lieutenant ordered fire on three local men riding a motorcycle, killing two of them and outraging his platoon. As determinations on Lorance’s fate unfold, questions probe the merits of his conviction, analyze the system at large and ultimately test the balance of guilt and innocence in the circumstances of today’s wars.

Adapted from the first novel by John Green (“The Fault in Our Stars”), “Looking for Alaska” is an 8-episode limited series that centers around teenager Miles “Pudge” Halter (Charlie Plummer), as he enrolls in boarding school to try to gain a deeper perspective on life. He falls in love with Alaska Young (Kristine Froseth), and finds a group of loyal friends. But after an unexpected tragedy, Miles and his close friends attempt to make sense of what they’ve been through.

In this reimagining of the classic ’90s series, “Party of Five” follows the five Acosta children — Emilio, Lucia, Beto, Valentina and baby Rafael — as they navigate the daily life struggles to survive as a family after their parents are suddenly deported to Mexico. Mixing family drama with incredibly relevant current events, “Party of Five,” from original series creators, Amy Lippman and Christopher Keyser along with executive producer Rodrigo Garcia and co-executive producer Michal Zebede, is a contemporary update for a whole new generation.

Created by Mark and Jay Duplass (HBO’s “Animals” and “Togetherness”), the late-night half-hour anthology series “Room 104” returns with 12 new episodes, telling unique and unexpected tales of the characters who pass through an unassuming room of a typical American chain motel. While the room stays the same, every episode of the series features a different story, with the tone, plot, characters, and even the time period, changing with each installment. Filled with plenty of twists and surprises, Season 3 offers a new discovery from one episode to the next, telling tales of everyday people striving for connection and meaning inside a single room.

After the Screening: a conversation with executive producers Mark Duplass and Sydney Fleischmann

The “Transparent” “Musicale Finale” takes the beloved Emmy® and Golden Globe® award-winning series to new heights as a dazzling movie fantasia inspired by classic musicals that shaped our culture. When the Pfeffermans face a life-changing loss, they begin a journey hilarious and melancholy, brazen and bold. As they take on this new transition and confront their grief–with all of their extended family members by their side–they come together to celebrate connection, joy, and transformation.

After the Screening: a conversation with executive producers Jill Soloway and Faith Soloway, and additional cast

On September 22, 1994, Friends debuted to more than 20 million viewers, and a close-knit group of 20-somethings nestled inside a New York City coffee shop entered the television airwaves. Produced by Warner Bros. Television for 10 acclaimed seasons, “Friends” upended the cultural landscape and created an indelible impact on American society through its iconic characters. But what resonated then — and continues today with a whole new generation of viewers — is the infectious chemistry and connection between Ross, Rachel, Joey, Monica, Chandler and Phoebe, and their honest depiction of friendship. To celebrate the show’s 25th anniversary, Tribeca TV is presenting Friends for the very first time in 4K digital restoration with two curated episodes — “The One with the Embryos” and “The One Where Everybody Finds Out” — hand-selected by the show’s creators and executive producers. This will kick off what will be a nationwide celebration of the series, with a theatrical release of producer-curated episodes throughout the United States. Following the Tribeca screenings, Friends executive producers, David Crane, Marta Kauffman, and Kevin Bright will come together to reflect on the series’ immeasurable legacy and pay tribute to the “Friends” who will always be there for us.

Acclaimed comedian, writer, producer, political commentator, actor and television host Hasan Minhaj will be in conversation to discuss his burgeoning career as one of the most incisive and poignant voices in television. Hasan rose to prominence in 2014 when he joined “The Daily Show with Jon Stewart” as a correspondent, where he was Stewart’s last hire, and continued on in that role after Trevor Noah took over as host the following year. Minhaj was the featured speaker at the 2017 White House Correspondents Dinner where his whip-smart commentary and political savvy garnered widespread attention. Minhaj went on to earn rave reviews and a 2018 Peabody Award for his one-hour Netflix comedy special “Hasan Minhaj: Homecoming King.” Currently, Minhaj is the host and creator of the weekly Peabody Award-winning comedy show “Patriot Act with Hasan Minhaj,” which explores the modern cultural and political landscape with depth and sincerity through his unique comedic voice. In 2019, Minhaj was listed among TIME’s 100 most influential people in the world. Tribeca is proud to host the accomplished, sharp-witted Hasan Minhaj as he illuminates his creative process and journey from stand-up comedy to television and beyond.

Versatile and acclaimed actor James Spader will be in conversation to discuss his accomplished and illustrious decades-spanning career as one of the most intoxicating and unique performers in both television and film. Spader burst onto the big screen with roles in such memorable 80’s films as “Pretty and Pink” and “Less Than Zero.” He went on to receive immense acclaim for his starring roles in the indie breakouts “Sex, Lies and Videotape,” for which he won the Best Actor Award at the Cannes Film Festival, and Steven Shainberg’s “Secretary.” Additional film roles include Steven Spielberg’s “Lincoln” and the titular villain in Marvel’s “Avengers: Age of Ultron.” Alongside his film work, Spader has made an indelible mark in television, winning three Emmy Awards for his seminal role as shameless attorney Alan Shore on “The Practice” and “Boston Legal,” making him the only actor to win consecutive Emmys playing the same character in two different series. Spader also co-starred on the beloved NBC comedy “The Office,” and his astonishing, Golden Globe-nominated portrayal of criminal mastermind Raymond “Red” Reddington on the hit NBC show “The Blacklist” has brought him to the forefront of accomplished actors doing exciting and distinctive work in television. Tribeca is thrilled to host the remarkable James Spader for a unique opportunity to delve deep into the career of one of the industry’s most fearless storytellers.