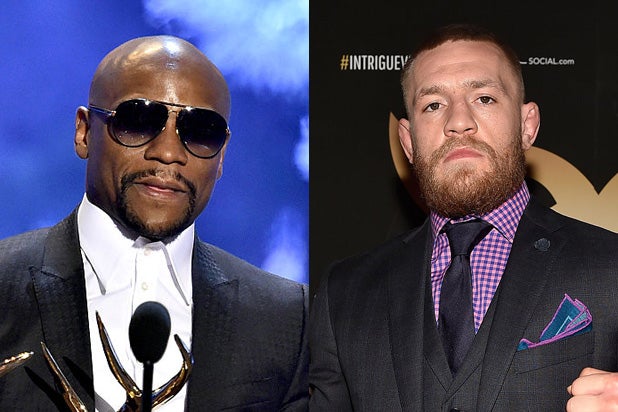 Who will win the upcoming fight between Floyd Mayweather and UFC’s Conor McGregor? The battle may have already been decided at their first press conference, where the two fighters traded trash talking like the pros they are.

“His little legs, his little core, I’m going to knock him out in four rounds, mark my words,” a confident McGregor said to Mayweather during the press conference at the Staples Center in Los Angeles.

McGregor also called out Mayweather for demanding boxing regulations instead of fighting inside the Octagon with UFC rules, calling it “half a fight.” “If it was a real fight, it wouldn’t even take one round,” McGregor said.

Also Read: Floyd Mayweather: 'Today, I Am Officially Out of Retirement for Conor McGregor' (Video)

Mayweather fired back, saying McGregor came to fight in the ring because “he knew I was the A-side.” Mayweather brandished his record, a perfect 49-0, and his money, even pulling an un-cashed check out of his backpack to boast how much he’s worth.

“God only made one thing perfect, and that’s my boxing record,” Mayweather said.

Mayweather has 12 years on McGregor. He came out of retirement at age 40 for this fight and insisted that although he’s not the same fighter he was even two years ago, he would still knock McGregor out. That didn’t sit well with McGregor, who laughed and joked Mayweather hasn’t knocked anyone out in 20 years.

Of course, this wouldn’t be a sports press conference if it didn’t in some way become about fashion. McGregor was decked out in a suit from his personal line of clothing. He said if you zoom in, the pinstripes read “F— You,” and he wasn’t lying.

Mayweather on the other hand wore a track suit hoodie with the American flag decorating the sleeves and hood.

McGregor and Mayweather will fight on Aug. 26 via pay-per-view on Showtime. Showtime will also air a behind-the-scenes series leading up to the fight, “All Access: Mayweather vs. McGregor” starting on July 28 at 10 p.m. ET.

See some clips of their trash talk below and judge for yourself who won the war of words:

Conor McGregor dancing during the face off with Floyd Mayweather. He doesn't give a f*ck. #MayPac pic.twitter.com/2CmFKW4WGR