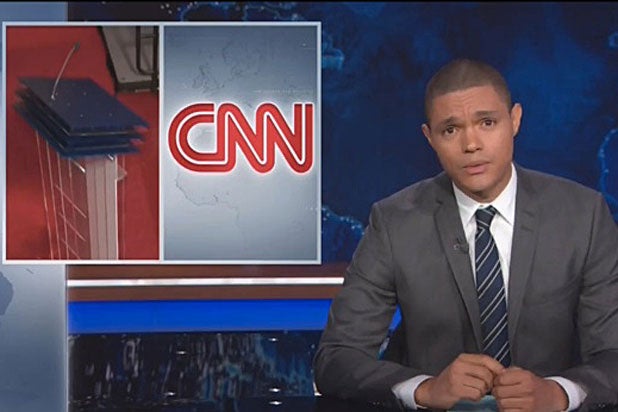 Hitting the nail on the satirical head, Trevor Noah compared the upcoming Democratic Presidential debate to a reality show on Monday.

But rather than making fun of candidates such as Hillary Clinton and Bernie Sanders, Noah mocked political correspondents who are being reduced to excited teenagers getting amped up to watch “with popcorn, Milk Duds and my dog.”

With Clinton and her dramatic story lines of the past 20 years being the star of the show, Sanders is hot on her heels — and being compared to a homecoming queen by the “Daily Show” host.

But as Noah pointed out, “the weirdest thing about CNN’s coverage isn’t how they are hyping who is there … but how they are hyping the people who aren’t there.” Namely Vice President Joe Biden, who has a podium left waiting in the wings for him in case he decides to join in.

“That joke’s not particularly funny,” he admitted, “but I just wanted wings.”

While Biden hasn’t indicated whether or not he’s running for president, current candidates Clinton, Sanders, Martin O’Malley, Jim Webb and Lincoln Chafee will all take the stage in Las Vegas.

CNN’s coverage of the Democratic debate begins at 8:30 p.m. ET on Tuesday.

“The Daily Show” airs Monday-Thursday at 11 p.m. on Comedy Central.