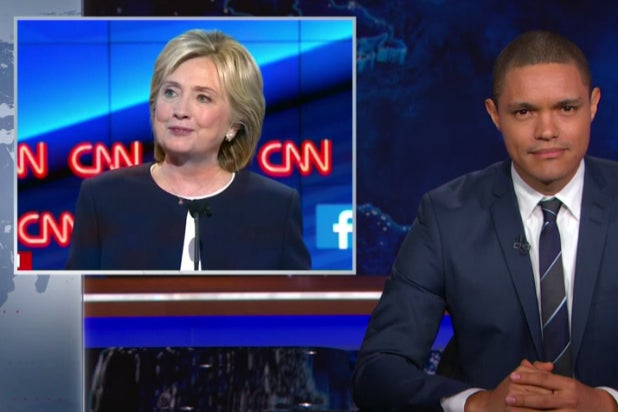 After setting up Hillary Clinton with some debate- and poll-earned praise, the South African comic crushed the left-leaning frontrunner over her soft answer about the differences between her and President Obama. Clinton simply used gender as a crutch at the CNN discussion, something that she’s taken heat for since.

“Really? That’s it? So the only thing separating you and President Obama is the fact that you have different parts?” Noah said through rhetorical questioning. “What are you, Mr. and Mrs. Potato Head?”

Later, Sen. Bernie Sanders, former Gov. Martin O’Malley and former Sen. Jim Webb each took turns as Noah’s punching bag — though none of them were destroyed as badly as former Gov. Lincoln Chafee, who didn’t quite shine on the Las Vegas cable news event.

Chafee had played the Boy Scout card, rattling off a list of his ethical credentials to be president. Noah was happy to humorously participate.

“… And I make my bed every morning, I’m extremely punctual, and I’ve never had a cavity,” the comedian added to Chafee’s laundry list of attributes.

Of course, the worst answer of the night may have been the Rhode Island governor’s response to why he voted for the controversial bank bill Glass-Steagall in 1999: “It was my very first vote, I just arrived, my dad just died …”

“…I just dropped my ice cream cone after only one lick,” Noah offered as a mocking continuation of the lame excuse.