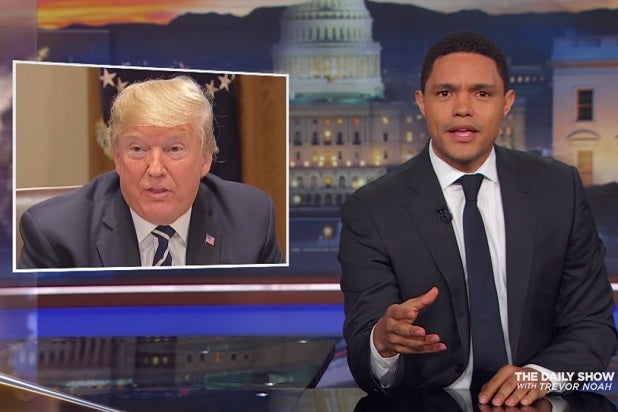 A version of this story about Trevor Noah appeared in the Down to the Wire issue of TheWrap’s Emmy magazine.

Trevor Noah, the South African comic who took over “The Daily Show” when Jon Stewart left in 2015, has come into own in the last year under the presidency of Donald Trump.

His nightly Comedy Central show is back in the Emmy race, competing for Outstanding Variety Talk Series, with a focus that like many of his late-night peers has become decidedly Trump-centric.

What’s it like to wake up in the morning and go to the news, knowing that you have a show to prepare?
What I do is I go, like, “What’s happening in the world? And what else can we talk about that’s not him?”

Which isn’t always easy to find, I’d imagine.
Definitely. We’re a show that was created specifically to cover the news and politics, and you have to find a way to deal with the deluge that is Donald Trump. He creates more news than any other single entity in the world, so you have to find a way to stem the fire hose and give it some kind of focus.

We’ve spent many days frustrated by the deluge of news, but now we’ve gotten more used to the erratic behavior of the commander in chief.

You’re on a show, “The Daily Show,” that under Jon Stewart really became a vital voice that helped shape the type of political humor we see on late-night these days.
It’s a beautiful platform that I inherited from Jon Stewart. He’s left an indelible mark on late-night comedy and satire in general. If you look at all of the shows that have been spawned, everyone from Colbert to Oliver to Sam Bee and myself, we are all tied to the genius that is Jon Stewart. That’s something I’m proud to be a part of.

Did it take you a while to feel comfortable in his seat?
It happened slowly. You never completely feel it. I haven’t gotten to the place where I step into the building or sit in the chair and think I’ve figured everything out. And I hope I don’t get there soon. I do enjoy the discomfort, combined with the constantly having to keep on my toes.

Did Trump’s election immediately change what you were doing?
No. The immediate direction when Trump became president was, “Where do you go from here? Does he change?” Everyone was waiting to see if Trump the showman was going to change into Trump the president.

And when he remained Trump the showman even as president, how did that impact you?
I feel like Donald Trump enabled me to take the show into a direction I wanted to take it in anyway. To give it more of an international bent — and strangely enough, Donald Trump has enabled that. He sparks international incidents on a whim, he opens up veins to get into things we didn’t think we could: trade wars, tariffs, farm subsidies … Donald Trump makes boring things exciting. That’s one thing I’ve decided to do, to use the fire he brings to any specific subject to get into the conversation.

Are you conscious of trying not to let him dominate the show?
I’m conscious of that every day. The default of the news and of the world is Trump, and the difficulty is digging out from the avalanche of his news to find news that we think is worth hearing in the world and America. It’s trying to find that balance of figuring out when and how to speak about him and when to move to something else.

And the news cycle can shift so heavily. You think you have one story you’re telling, and overnight Donald Trump can flip and turn. The difficulty is figuring out which longer-term stories to tell, and also being able to pivot and tell stories in a slightly different way.

James Corden has said he’s wary of getting too political because he’s not from the United States. As a South African, do you feel any caution about speaking out on American issues?
I think two things on that. One, when it comes to politics or social issues, I don’t think you need to be born anywhere to speak to ideas and to speak to experiences. I think as a human being, especially when you live in the world with people, you should be able to formulate opinions. And I think that’s become part of the problem with politics in America. People listen less to the message and more to where it comes from. If you make a statement and tell people it comes from Donald Trump, they won’t consider the statement — how they feel about it will depend on what they think of Trump. Politics has become a team sport, as opposed to people voting for their best interests.

And two, I don’t think anyone can say being born in America has given them a better way to know and understand Donald Trump.