The Trump Organization was found guilty on 17 counts of tax fraud and other financial crimes this week – but Trevor Noah seriously doubts that means any kind of direct consequences for the twice impeached former president. 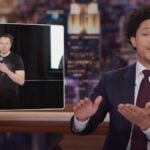 So, with this court decision, Noah figures Trump thinks the same is probably true.

“You know what that means! Donald Trump is going to prison — to visit all the lower ranking people who did this without his knowledge or his permission,” Noah joked. “Yeah because we all know that’s how that works in the world, right? All the successes in Trump’s organization, they’re due to the genius of Donald Trump. All the crimes, he had no idea.”

Noah then brought out his own Trump impression, imitating how the former president’s logic tends to track.

“He’s like ‘That’s right folks, I have zero control over the things I run, which is why you should vote for me to run the country,'” Noah mocked. “‘So I can run it like one of my companies, which I don’t even run. I don’t even run.'” 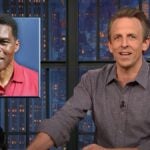 Also Read:
Seth Meyers Explains to Herschel Walker That Pronouns Are ‘What You Call Your Illegitimate Kids': ‘Oh, Them?’ (Video)
x