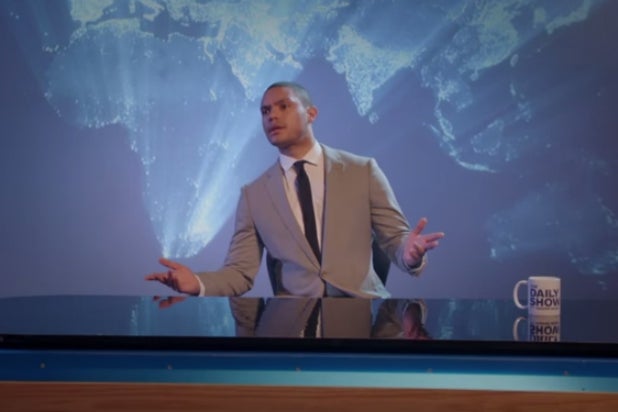 Trevor Noah’s debut night hosting “The Daily Show” on Monday had a very high bar to reach as he took over from Jon Stewart after 16 years.

Fortunately for the South African comedian, he’s already a hit with viewers if the glowing social media reaction is anything to go by.

One Twitter user predicted that Noah is “going to surprise a lot of people here in the States,” as he did such an awesome job on his first night. Another thought that his “dimples are endearing,” which has got to be a bonus for any host.

Others called Noah “fantastic,” “awesome” and another called it “the best opening shows of any host. He seemed so at ease and in his element.”

“This is surreal for me. I’m not gonna lie,” Noah began his new desk job at the helm of the Comedy Central show. “Growing up in the dusty streets of South Africa, I never dreamed that I’d one day have — well two things really — an indoor toilet, and a job as host of ‘The Daily Show.’ And now I have both, and I’m quite comfortable with one of them.”

He also joked about taking the job from stateside-born candidates: “Once more, a job Americans rejected is now being done by an immigrant,” he cracked.

Noah was joined by first guest Kevin Hart, but all eyes were on him.

@Trevornoah is doing an awesome job in @TheDailyShow premiere, I think he's going to surprise a lot of people here in the States

#DailyShow host @trevornoah crushed it tonight and showed how to rock a first day on the job, despite much opposition pic.twitter.com/ghesA2iiJu

That was one of the best opening shows of any host. He seemed so at ease and in his element. Great job, @Trevornoah! #TDSWTN #DailyShow

I like Trevor Noah so far, but Roy Wood Jr. the correspondent is stealing the show right now.

.@Trevornoah is making me laugh out loud during his @TheDailyShow debut. He's gonna be awesome.

Okay @Trevornoah, you won me over tonight. Great job with @TheDailyShow; we'll keep you and you can sit with us.

"Brother can't catch a cab, you think we can catch a spaceship…Black people ain't going to Mars!" @roywoodjr to @Trevornoah @TheDailyShow

If you're not watching #DailyShow with @Trevornoah, what are you doing with your life right now?

My verdict (and the show isn't over yet): Loving it. Congrats @Trevornoah & the whole #DailyShow team on a great job.

If @TrevorNoah is nervous at all then he's an even better actor than comic. A fantastic debut!

All hail America's new black stepdad, Trevor Noah, who is absolutely slaying with pitch perfect comedic timing on The #DailyShow.

Okay @Trevornoah, you won me over tonight. Great job with @TheDailyShow; we'll keep you and you can sit with us.

I thought @Trevornoah debut on @TheDailyShow was fantastic. You had me at the "what a waste" Pope joke.

Super impressed with the first night of #TheDailyShow. Can't wait for more of @Trevornoah.

Nice job @Trevornoah!!!!!! Fight through the bs! We believe in you!!! #DAILYSHOW #jonsgonebuthislegacyliveson