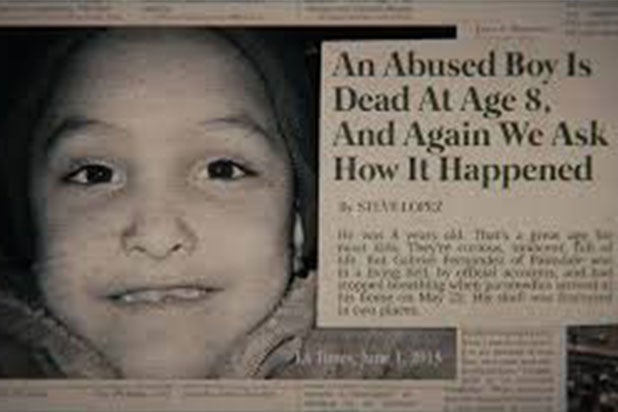 Not only does Netflix’s “The Trials of Gabriel Fernandez” chronicle the murder of an 8-year-old boy at the hands of his mother and her boyfriend, but it examines the failure of the Department of Child and Family Services at a time when a small child needed help the most.

Director Brian Knappenberger told TheWrap that DCFS didn’t just fail to do their job to save Gabriel Fernandez and other children that have been abused and died from their injuries, but it failed to uphold transparency in not only speaking to the filmmakers of the groundbreaking documentary but also its duties to the public.

“Without question, the biggest challenge was getting DCFS to talk to us, and we wanted an interview with the current director of DCFS, Bobby Cagle,” Knappenberger told TheWrap. “We asked them for one-and-a-half years — their first excuse was that he wasn’t the director of DCFS at the time Gabriel died. But that was strange, especially because our question was how things have changed and how they were addressing things. Unfortunately, there was this rapid series of deaths in Antelope Valley — Anthony Avalos and Noah Cuatro — and he was the director at the time of these deaths.”

He added: “It’s disappointing that a public agency that touches people doesn’t want to talk — the public deserves better. They have a responsibility to talk about this issue, and their instinct is more towards being secretive and looking at it more as a PR problem. They’ve said, ‘It’s about protecting the institution at all costs.’ But toxicity happens when there is secrecy and the only way to solve problems is to let people understand, be transparent, and then making the system better.”

On Monday, DCFS spoke out about the case for the first time, saying in a statement to TheWrap: “We were in contact with the producers and director of the documentary about Gabriel’s death beginning in 2018 and through 2019. In that time, we had several phone conversations where we answered questions; exchanged emails providing information; provided access to film a ride-along with a social worker in Palmdale; provided access to film a ride-along with an Emergency Response Command Post social worker; secured an interview with Division Chief Ed Fithyan; and a tour of the Child Protection Hotline that was filmed.”

TheWrap has reached out to Knappenberger for additional comment but a disclaimer at the end of the documentary said that DCFS declined to take part in the series in its entirety.

Also Read: 'The Trials of Gabriel Fernandez': Director Had Questions for Abusers, but They Never Called From Prison

Gabriel Fernandez died in 2013, after eight months of abuse by his mother Pearl Fernandez and her boyfriend, Isauro Aguirre. Although law enforcement and child services were called to the residence on multiple occasions, nothing was ever done to save him. Caseworkers had been watching the case for months but failed to intervene.

In fact, one of the caseworkers on the case, Greg Merritt, told The Atlantic that he “concluded long ago that some of the children who depended on the department would inevitably be injured, if not killed.” Charges were brought against the social workers, something that had never happened before. However, they escaped punishment when California’s second appeals court threw out the case on the grounds that prosecutors did not prove the social workers “had the requisite duty to control the abusers,” and further concluded they “did not have care or custody of Gabriel

Prosecutors have asked the court for a re-hearing of the case against the social workers.

Unfortunately, five years later, another boy died under the same circumstances. 10-year-old Anthony Avalos was denied access to food and a bathroom, and was abused in the same way as Gabriel was. Calls were made by teachers and relatives, but DCFS never helped the boy who had come out as gay just weeks prior to his death. A spokesperson for DCFS said that they did indeed provide services to the family from May 2014 to December 2014 and their last referral was in 2016. However, they did not receive enough information but provided the family with further resources. And, this all happened in Antelope Valley — where Gabriel Fernandez had died as well.

When prosecutors went to medical hub in Lancaster, Calif. (part of the Antelope Valley), they found it had been closed due to insufficient funding, the docu-series says. Investigators believe that there have been more than 150 cases where children have been abused even after it was brought to DCFS attention.

Most recently, a four-year-old boy was being abused and a court order was placed to have him removed from his home. DCFS never followed through, and the boy died under “suspicious circumstances.”

“DCFS needs to change. There needs to be a strong look at this, and there has to be an in-depth look at what’s happening and I really hope that this platform does that,” Knappenberger said. “This was very emotional for us — this really meant something to everybody. We felt this could create a broader awareness and create change.”

He added: “There needs to be some pressure kept on DCFS and the public should deserve some transparency.”

In their statement, DCFS also said:

“Los Angeles County, and specifically the Antelope Valley community, have lived with the awful tragedy of Gabriel Fernadez’s death for the last seven years. What happened to Gabriel was horrific and inhumane; no child should ever suffer such abuse and neglect at the hands of a caregiver.”

DCFS said it has implemented new reforms to ensure children’s welfare, including hiring more social workers, educating them, and using new tools and technology for more rapid reviews. You can read the entire statement here.

Pearl Fernandez received a life sentence without the possibility of parole, and Aguirre received the death penalty for the murder of Gabriel Fernandez.