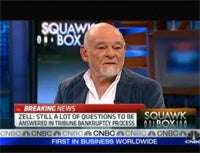 Appearing on CNBC, Tribune Co. chief Sam Zell, currently navigating bankruptcy in court, said the delay in emerging from Chapter 11 is due to investor uncertainty about the future of the newspaper business. That future, he said, is digital.

“Going forward, it’s going to require all kinds of different approaches," Zell said, "including probably most significant, the elimination of home delivery and the replacement of it by PDFs.”

PDFs?!!! Has Zell even seen a digital reader before?

"The iPad is the real example of almost replicating a newspaper on an instrument. I think that is only the beginning of how that is all going to evolve."