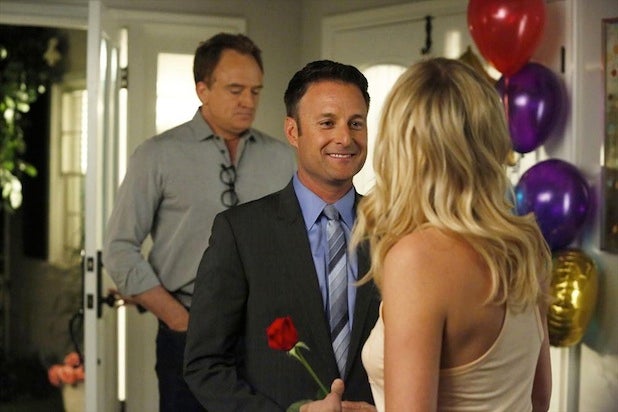 ABC’s “Trophy Wife,” about a young third wife trying to prove herself to her husband’s mixed family and their community, taps its rich Disney-ABC connections by featuring nods to “Aladdin,” “The Bachelor” and “Scandal” on upcoming episodes.

To start off, “Trophy Wife” throws a Disney-ABC birthday party for youngest child, Bert (played by wise-beyond his years nine-year-old Albert Tsai), on Tuesday’s episode featuring an “Aladdin” theme and a cameo from “The Bachelor” host Chris Harrison. But, the over-the-top fiesta almost went in another direction – a “Great Gatsby” party.

Executive producer Sarah Haskins told reporters after a screening of the episode that the theme based on the decadent lifestyle of a young millionaire “felt maybe a little too precocious.”

“Trophy Wife” plays the “Aladdin” theme to the hilt with costumes, firewalkers and flying carpets.

But, the grandiose episode doesn’t stop there. Executive producer Lee Eisenberg used the opportunity to live vicariously through the show’s characters.

“Well, this isn’t embarrassing… I’m a huge fan of ‘The Bachelor,'” Eisenberg admitted.

He’s such a big fan that Eisenberg hosts a weekly “Bachelor” viewing party at his house. And so when he thought about bringing on a celebrity for Bert’s birthday episode, he of course thought of Harrison (who had actually previously attended one of Eisenberg’s viewing parties).

“So then we called him and he was completely down, and it was great,” Eisenberg recalled. “It was like I called my friend and he was like ‘Yeah, we don’t have to deal with agents or lawyers, just give me a call directly.'”

Harrison’s appearance on the show has a nice twist, which I won’t spoil for you. But, Eisenberg didn’t quite get the super fan’s welcome he was hoping for from Harrison on-set.

“He was talking to [star Malin Akerman] and I said, ‘Hey Chris, I just want to thank you for doing this,’ and I think he thought I was in craft services or something and he said, ‘You’re welcome’ and he immediately turned back to Malin, which I guess makes sense,” the EP remembered.

He continued, “I just stood awkwardly waiting for him to turn back to me, and he didn’t and then I just shuffled back to the writers room.”

The comedy will make another nod to fellow ABC show, “Scandal,” later this season.

Also read: 5 Things to Know Ahead of ‘Scandal’s’ Spring Return

“We’re excited. We all have ‘Scandal’ fans on this show, and we have an episode coming up that becomes kind of a ‘Scandal’ parody,” executive producer Emily Halpern said. “Diane has a bit of a failure, which as we know is very unlike her, and she winds up binge watching a lot of ‘Scandal’ episodes, and channels her Olivia Pope.”

Diane (Marcia Gay Harden), Pete’s ex-wife with the Type A personality, will enlist newbie wife Kate (Akerman) in her mission to “take down the conspiracy in the PTA,” described Eisenberg. “It’s very high stakes.”