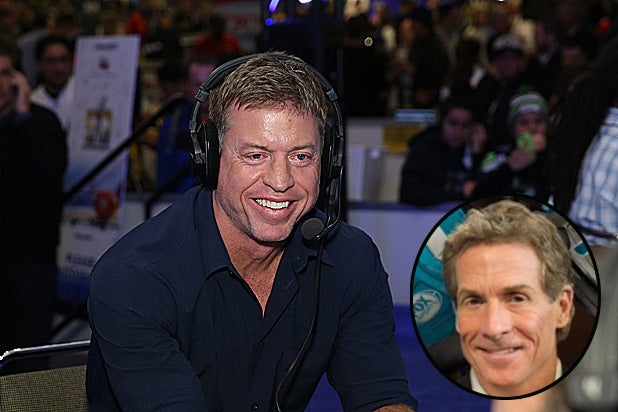 Troy Aikman is not a fan of new colleague Skip Bayless, and he’s being very vocal about it.

The longtime “NFL on Fox” analyst criticized both Fox Sports and Bayless in a bluntly-worded interview with Sports Illustrated Tuesday, in which he was harshly critical of the network’s latest acquisition from ESPN.

“To say I’m disappointed in the hiring of Skip Bayless would be an enormous understatement,” the former Dallas Cowboys quarterback said.

“Clearly, [Fox Sports President of National Networks] Jamie Horowitz and I have a difference of opinion when it comes to building a successful organization. I believe success is achieved by acquiring and developing talented, respected and credible individuals, none of which applies to Skip Bayless,” he continued.

Aikman, who joined Fox Sports in 2001 shortly after retiring from the NFL, has a personal history with Bayless, according to SI.

In his 1996 book “Hell-Bent: The Crazy Truth About the ‘Win Or Else’ Dallas Cowboys,” Bayless addressed unsubstantiated rumors that Aikman was gay, something later described by former Dallas Morning News sports editor Dave Smith in an interview with The New York Times as “the most unfair thing in my 45 years of journalism.”

The Super Bowl XXVII MVP voiced his thoughts on the book’s claims in a prior interview with SI’s Richard Deitsch two years ago.

“I’m upset about it because it was made up and there was nothing accurate about anything that was insinuated,” Aikman said. “And he did it, as he does everything, just for attention.”

Bayless, who co-hosted ESPN’s morning debate series “First Take” for a dozen years, is now with main competitor Fox Sports 1, where he made his debut Tuesday morning.

Max Kellerman has since filled his shoes on “First Take” opposite Stephen A. Smith.

Fox Sports did not immediately respond to TheWrap’s request for comment.