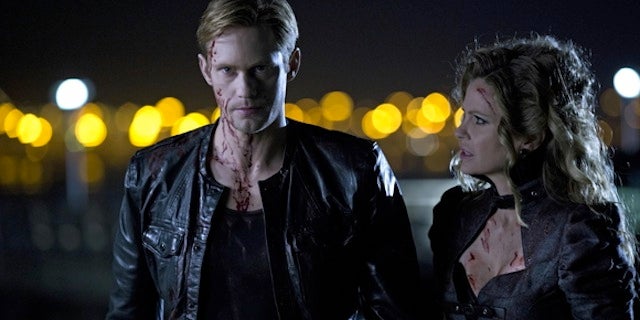 When HBO's "True Blood" returns on Sunday, the Authority is going down in flames, Bill (Stephen Moyer) is a reincarnated vamp goddess (yes, goddess), Eric (Alexander Skarsgard) and Sookie (Anna Paquin) are leading a small rebellion to safety, and humans are waging wars on vampires.

How did HBO's "True Blood" arrive at this point in the action? TheWrap has put together the seven things you need to know before watching Sunday's Season 6 premiere.

1. Billith. After becoming the poster boy for religious fanaticism, Bill never broke away from the spell of the original fanger, Lilith. After doing away with Authority member Salome (Valentina Cervi) and turning Sookie away, he drank an entire vial of Lilith blood. He then basically imploded and then resurrected into some big, bloody, monster.

2. Jason is no fan of fangs. Haunted by visions of his dead parents and learning that mysterious ancient vamp Warlow killed them in an attempt to claim Sookie (who's the family's first faerie female, promised to him in a contract with a Stackhouse ancestor), Jason (Ryan Kwanten) has turned firmly anti-vampire. That places him in direct opposition to his eternally vamp-loving sister and former flame, Jessica (Deborah Ann Woll).

3. Pam and Tara lovin'. It's hot and hotter with these two. So, it remains to be seen whether they can sustain the flirtation amid the threats to their livelihood.

4. Alcide is the new pack master. Doped up on vampire blood, Alcide took down JD (Louis Herthum) and claimed the Shreveport werewolf pack for his own.

5. Luna has shapeshifted herself into a predicament. After taking on the form of anti-fanger-turned-vamp-spokesman Steve (Michael McMillan) in a televised interview in order to free her daughter from the Authority, Luna (Janina Gavankar) is unable to keep up the charade. Although, weakened by the skin walking, Luna and Sam are able to escape the Authority with her daughter.

6. Andy's faerie quads. After coming clean to Holly (Lauren Bowles) about bumping and grinding with a fae mistress, Andy's (Chris Bauer) lover appears in labor. With the help of his Wiccan girlfriend (who apparently has midwifery skills, as well), Andy is left with not one or two hybrid human-fae babies, but four.

7. A Tru Blood shortage. Following the bombings of Tru Blood factories (orchestrated by the fundamentalist Sanguinistas in the Authority), hungry vamps began attacking humans again. As a result, Louisiana's governor ordered that the bloodsuckers be placed on lockdown.

Watch HBO's handy video recap of the season below.