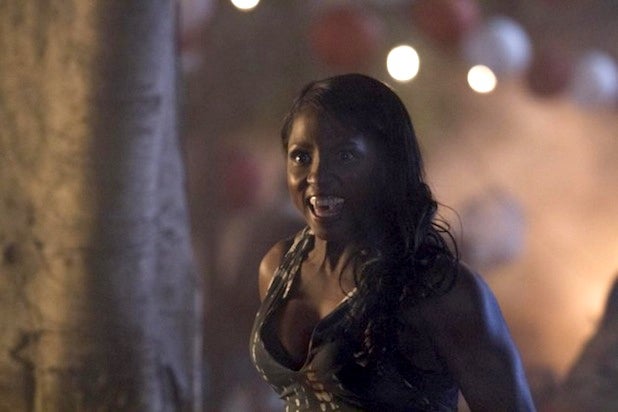 HBO’s “True Blood” wasn’t apologetic about the sudden death of an important character during Sunday’s seventh season premiere. It didn’t search for a lot of deep meaning, nor did it give the viewers or characters a lot of time to grieve. It just happened.

(Spoiler alert: Do not read on if you don’t want to know what happened on Sunday’s episode, “Jesus Gonna Be Here.”)

The episode picked up just as last season ended. Sam Merlotte (Sam Trammell) was holding a social to pair non-infected vampires with humans when a pack of Hep-V-infected vampires come across the party. It’s a confusing scene of vampires attacking vampires and humans being attacked by vampires. And then suddenly they were gone.

Cutting through the sudden quiet was the sound of Tara’s (Rutina Wesley) mother’s screaming. She was protecting her mother from an infected vampire and killed. Nothing was left of her but blood and entrails.

Where was Tara’s maker? She was last seen in Morocco in her quest to find Eric (Alexander Skarsgard).

Jessica had to wipe her tears fast, as well. She had vowed to protect Andy’s last living faery daughter — after she killed her three sisters — and there was a big, crazy, infected vampire who really wanted a taste of Adilyne (Bailey Noble). She stood her ground until dawn as the light began to burn both her and the crazy vamp’s skin. Against her father and Jessica’s warnings, Adilyne invited Jessica in to save her from the true death.

Sookie, too, had no time to mourn Tara. She would also have to earn trust from others.

The next day, the survivors met in church to discuss the next steps in this war. Sookie attended, but Tara’s mom cast her out of church, telling her that she and her vampire-lovin’ ways killed her daughter. Sookie respected that Lettie Mae (Adina Porter) had the bravery to say it out loud. After all, she could hear the thoughts of everyone in that church. She knew that they all blamed her for what has gone down in Bon Temps.

So, in one last ditch effort Sookie pleaded with the townsfolk to let her help. With her knowledge and powers, she could help. It remains to be seen whether they’ll let her.

Will you be mourning Tara?

Watch a new preview of what’s to come below: