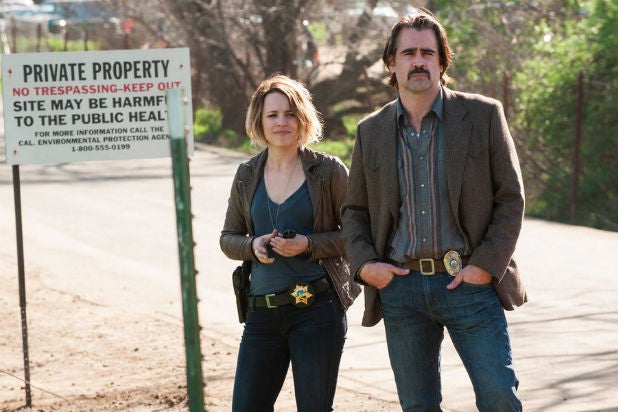 Two conversations have surrounded what was a highly anticipated second season of HBO’s “True Detective”: The first was how disappointing it was both in comparison to the first season and as a standalone body of work, the second how confusing the plot had become ahead of Sunday’s finale.

Always bleak, packed with byzantine B-stories and laughably quotable, the last 90-minute chapter has been delivered and with it resolutions for its four leads.

This recap will not attempt to sweep up the broken glass of Nic Pizzolatto’s violent and confusing season (which was at times beautifully written, acted and choreographed, despite social media chatter). Instead, it will answer one question, the thread that connects the story and its characters: Who killed Ben Caspere?

A corrupt former city manager in Vinci, Calif., Caspere’s murder in episode one united our detectives and sparked a series of very unfortunate events for his partner Semyon — sending him spiraling into the vice and gangster activity he had hoped to climb out of with Caspere’s connections in a land development deal.

His genitals shot clean off and eyes eaten out by acid, Caspere’s corpse is also a link to a ring of corruption between police, real estate developers and politicians. Who offed him and why?

Caspere’s assistant, a girl introduced as Erica Johnson, was revealed as a victim in a robbery orchestrated by Vinci police and Caspere himself in the early ’90s. The resulting events left her and her brother without parents, charting a long course of revenge that led to Erica changing her identity and inserting herself into Caspere’s corrupt world.

She paved the way for her brother, Lenny (disguising himself as a still photographer on a movie production Caspere was financing) to finish him off. The question and the answer wouldn’t matter, it seems, as even McAdams’ Bezzerides remarks at the episode’s opening, “Caspere’s murder, it opened up all this stuff. We’ve always been set up.”

An appropriate sentiment for what it was like to watch season two of “True Detective.”

In the final moments of the penultimate episode, Woodrough is shot and killed, not the best foreshadowing to how the end would treat his counterparts. In that same episode, Bezzerides and Velcoro made good on that silent, chain-smoking sexual tension of theirs and subsequently raised the stakes of the finale — what becomes of the broken lovers?

Nothing much. While the new couple track down Erica Johnson and see her through to confession, there’s still the matter of the evil forces in the police, Mayor’s office and organized crime to take down.

Velcoro and Semyon team up, as they have over the decades in a mutually beneficial relationship between business man and compromised cop, to intercept an exchange of over $12 million, split the proceeds and make it out of the country to retire in hiding. They succeed in killing the majority of their enemies and making off with the cash.

Bezzerides is uncharacteristically sequestered during this mission, hiding out waiting for Velcoro to ride in with a sack of money and tickets to Venezuela. Velcoro’s son, another of those byzantine subplots, inspires a pit stop on his way home to Bezzerides. It’s there, as he waves goodbye to his boy playing a schoolyard game, dirty cops track him and his vehicle. A clean escape becomes impossible.

Velcoro leads the police detail into the wilderness, replete with gratuitous shots of California Red Oaks, where they shoot him to death. Before his demise, he makes an old friend and bar manager arranging the transport to Venezuela promise to secure Bezzerides on a boat to safety.  Meanwhile Semyon converts his cold hard cash into much more compact diamonds, and almost makes it to paradise with his tough but gorgeous wife Jordan (perhaps the most endearing performance this season, from Kelly Reilly).

Some lower-level thugs running drugs through the proprietor’s clubs come calling just before he can get away (in episode 7, Semyon destroys the majority of his property in retaliation for a hostile takeover). He appeases them with $1 million cash socked away in a suitcase, and almost makes it out alive before one of their henchmen demands the suit off of Semyon’s back in the exchange.

“No problem,” Vaughn spits in character, “you know, I didn’t wear a suit until I was 38.” He headbutts the man, as forking over his blazer means forking over the diamonds resting in the breast pocket, and takes a knife in the ribs from one of his cohorts as a result.

The finale sets up Bezzerides as a sole survivor, who makes her boat ride securely armed with physical evidence of the corruption that has unfolded over the past eight episodes. She eventually meets up with Jordan Semyon and a lingering disciple of Frank’s, who guides them through South America.

In the series’ final moments, she meets up with a journalist and recalls the long sad process. She’s softer, somehow. Likely because in the hotel room where they meet,  she’s not really a police officer — she’s a victim and a survivor documenting atrocities, a role Bezzerides had never allowed herself to play in her own life, one weighed by an abduction and sexual abuse as a girl. Or perhaps, as we learn, because she’s now a mother to a bouncing baby boy with Velcoro’s dark hair.

The reporter urges her to come back to the States, to testify in whatever legal proceedings result from his eventual bombshell story.

The Evolution of Taylor Kitsch: 'Snakes on a Plane' to 'True Detective' (Photos)

Despite flops like “John Carter,” actor is poised for big comeback with role in HBO anthology series