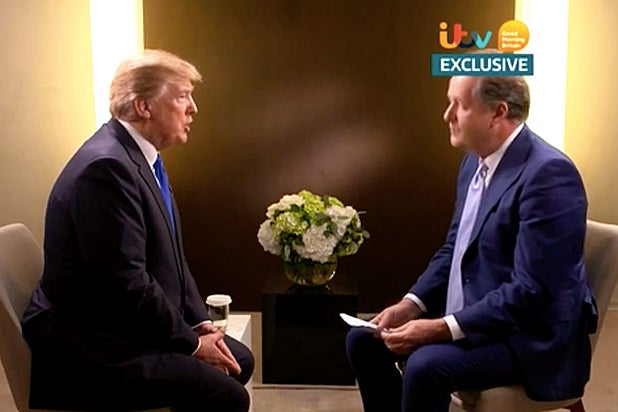 Donald Trump and Piers Morgan acted like old friends in their highly-anticipated sit-down interview, during which Trump pledged once again to fight “radical Islamic terror.”

The clip from the upcoming segment — set to air on ITV Hub in the U.K. on Sunday, Jan. 28 at 10 p.m. — was released by “Good Morning Britain” on Thursday night, and showed Trump telling the host, “I missed you.”

Morgan, who previously won the Trump-hosted “Celebrity Apprentice,” interviewed the president during the World Economic Forum in Davos, Switzerland. It is the first international TV interview that Trump has taken since becoming president.

“I am a big believer in fighting radical Islamic terror,” Trump said, when Morgan pointed out that he retweeted unverified videos, he stumbled over his words. “I didn’t do it … I did a retweet,” he responded.

Trump went on to say that despite rocky relations with the British government, he’s a fan of the country.

“The real me is someone who loves Britain, loves the U.K. … I love Scotland,” the avid golfer added. “I don’t want to make any difficulty for your country.”

Morgan then asked him to apologize to the people of Britain. “If you’re telling me they’re horrible racist people, I would certainly apologize if you would like me to do that,” he said, referring to the creators of the videos.

The president went on to say that he has a “very good relationship” with Prime Minister Theresa May and praised her for doing “a very good job.”

Watch the teaser below and click here for the full clip.

WORLD EXCLUSIVE: Here’s the moment when @piersmorgan @gmb was reunited with President @realDonaldTrump.

The full interview will be broadcast on @ITV on Sunday 28 January at 10pm and available on the ITV Hub. pic.twitter.com/E5UmOKAqiq

Despite the chumminess, Morgan has voiced his criticism of Trump’s actions in the past. Last November, he blasted Trump for sharing the videos from “disgustingly racist far-right extremists” after Trump retweeted videos that claim to show Muslims engaging in violent acts, The Hill reported.

See Morgan’s tweets about the interview below.

BREAKING NEWS:
President Trump has publicly apologised for retweeting far-right group Britain First.
Says he didn't know who they were. 'I don't want to be involved with these people. If you're telling me they're horrible racist people. I certainly apologise.' pic.twitter.com/S1apSWC7rR