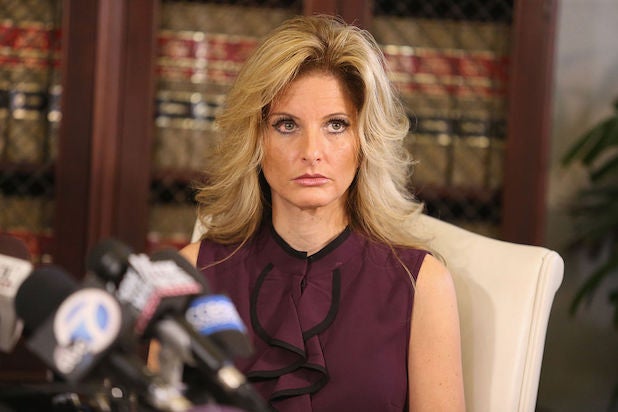 LOS ANGELES, CA - OCTOBER 14: Summer Zervos, a former candidate on ¬ìThe Apprentice¬î season five, who is accusing Donald Trump of inappropriate sexual conduct, speaks to the press with her attorney Gloria Allred October 14, 2016 in Los Angeles, California. This is the first time the accuser has spoken publicly about the alleged incident. (Photo by Frederick M. Brown/Getty Images)

A former contestant on Donald Trump’s “The Apprentice,” who is suing the president for defamation, is seeking recordings from the reality TV competition to aid her in her suit.

Zervos is also seeking records pertaining to Trump’s stays at the Beverly Hills Hotel, where Zervos has alleged that Trump grabbed her breast without her consent.

Zervos’ attorney, Marrian Wang, said Wednesday that subpoenas had been issued to the hotel, as well as “The Apprentice” archives owner Metro-Goldwyn-Mayer, for the records, the New York Times reports.

“We’re gathering evidence that we believe will prove that the defendant lied when he falsely denigrated Ms. Zervos and when he denied sexually assaulting her,” Wang said, according to the Times.

The subpoena issued to the hotel asks for records pertaining to stays by Trump through 2005 through 2009, along with documents pertaining to Zervos, Trump’s bodyguard and his assistant. The MGM subpoena asks for documents or recordings featuring Zervos or Trump talking about Zervos, along with recordings featuring Trump talking about women “in any sexual or inappropriate manner.”

Zervos alleges that the groping incident took place in 2007.

Zervos filed suit in January 2017, alleging that Trump falsely branded Zervos a liar after she made her accusations public, calling her story “totally made up nonsense.”

Zervos is seeking a retraction plus unspecified damages.

“Ms. Zervos was ambushed by Mr. Trump on more than one occasion. Mr. Trump suddenly, and without her consent, kissed her on the mouth repeatedly, he touched her breast, and he pressed his genitals up against her,” the lawsuit reads. “Ms. Zervos never consented to any of this disgusting touching. Instead, she repeatedly expressed that he should stop his inappropriate sexual behavior, including by shoving him away from her forcefully and telling him to ‘get real.’ Mr. Trump did not care, he kept touching her anyway.”

Trump spokeswoman Hope Hicks told TheWrap at the time, “There is no truth to this absurd story.”