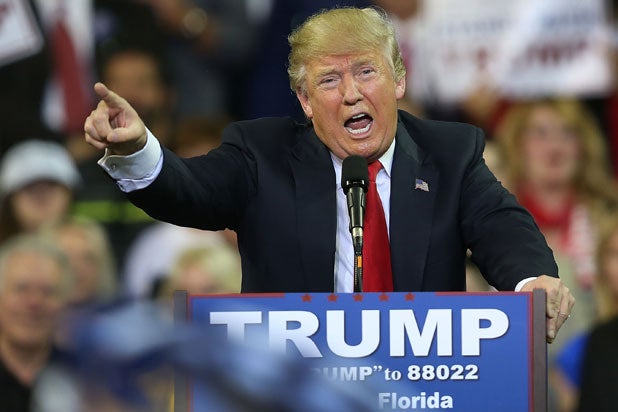 Does Donald Trump own stock in the word “Hitler”? Because he seems to be going out of his way to get people to use it.

On Saturday, the real estate developer basically handed fresh material to the people (including Bill Maher, Glenn Beck, and Louis C.K.) who keep comparing him to Adolf Hitler.

“Let’s do a pledge,” he said at a rally in Orlando, Florida, on Saturday. “Everybody, who likes me in this room? OK, I’ve never done this before. Can I have a pledge, a swearing? Raise your right hand. I do solemnly swear that I, no matter how I feel, no matter what the conditions, if there’s hurricanes or whatever … will vote on or before the 12th for Donald J. Trump for president.”

Many observed that the raised right hand bears some resemblance to the “Heil Hitler” salute.

The image resonated so much that when Washington Post reporter Jenna Johnson tweeted an image of Trump calling for the pledge, she was retweeted more than 10,000 times.

Donald Trump makes members of his Orlando crowd raise their right hands and swear to vote in the primary. pic.twitter.com/EVenRilJrV

To be fair, a lot of other people besides Nazis raise their right hands to make pledges, including people being sworn in before they testify in court. And the president, when he’s sworn into office.

“Don’t forget you all raised your hand, you swore,” Trumps told his audience after they swore their loyalty. “Bad things happen if you don’t live up to what you just did.”