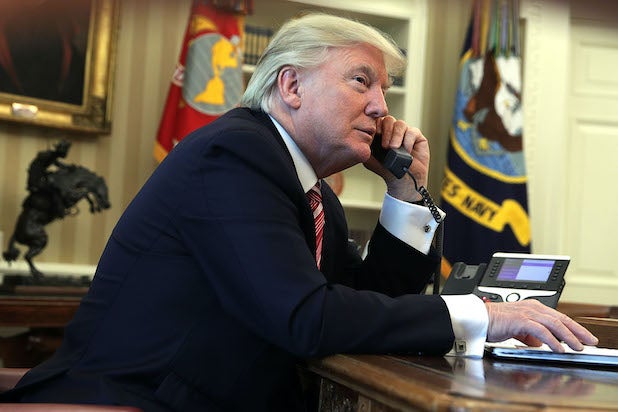 The Washington Post’s audio recording of President Donald Trump urging Georgia secretary of state Brad Raffensperger to “find” enough votes to help him overturn the election in which he lost to Joe Biden has flabbergasted Hollywood and the media, with some calling for him to be impeached again or for his immediate removal.

In Saturday’s hour-long phone call between Trump and Raffensperger (which you can hear in full here), Trump can be heard berating the Georgia secretary of state as well as pleading, flattering him and even issuing a vague threat of criminal consequences in order to find enough votes to overtake Biden in the closely-contested state.

“There’s nothing wrong with saying, you know, um, that you’ve recalculated,” Trump said on the tape obtained by the Post Sunday. “All I want to do is this: I just want to find 11,780 votes, which is one more than we have. Because we won the state.”

Celebrities and media personalities took to Twitter Sunday to call the tape “damning” and wondered what other unheard recordings might be out there and if this is just the tip of the iceberg.

“The #TrumpTapes are DAMNING. ‘I just need 11,780 votes’ — coupled with vague threats of prosecution — sounds like extortion, voter fraud, election interference and organised [sic] crime talk,” Joy Reid said in a tweet. “I’m no lawyer, thought, so shouldn’t a grand jury look into this?”

“The last time a tape like this was released the president resigned three days later,” actress Debra Messing tweeted, referring to President Nixon and the Watergate scandal.

Trump on Sunday tweeted that he spoke with Raffensperger and said that the secretary of state was “unwilling, or unable” to call out accusations of voter fraud that have since been debunked, to which the Georgia secretary responded, “Respectfully, President Trump: What you’re saying is not true.”

As heard in the audio from the Post, Raffensperger pushed back on Trump during the call and said that “the data that you have is wrong.” Trump also said that if Raffensperger didn’t act soon, it could affect the results of the run-off elections for the Senate in Georgia taking place Tuesday.

All of this comes after 12 Republican senators said they would be challenging the results and calling for an “immediate” 10-day audit looking into all claims of fraud. The Senate is meant to meet on Wednesday to certify the election results. President-elect Joe Biden will then be inaugurated on Jan. 20; this move is intended to delay that result.

See some more reaction from Hollywood and the media below, and listen to the audio recording via the Post here.

The last time a tape like this was released the president resigned three days later. #TrumpTapes https://t.co/0VhJ0HqUF7

The #TrumpTapes are DAMNING. "I just need 11,780 votes" — coupled with vague threats of prosecution — sounds like extortion, voter fraud, election interference and organised crime talk. I'm no lawyer, thought, so shouldn't a grand jury look into this?

The phrase "abusing his power" refers to *political* offenses, Preet.

It's time for all attorneys who wish to uphold their oaths to the Constitution to address the *criminal activity* of this president as established by the #TrumpTapes.

No more pretending this is just politics. https://t.co/bx7vHCl0Zc

This is criminal extortion by a sitting president in an attempt to overturn a democratic election.

Impeach him again. Then prosecute him once he’s out of office.

I know Biden wants to “heal”, and that’s how we begin that process… because this cannot stand. https://t.co/YCskXMlRft

Listen to this shocking recording of Trump’s call to Georgia’s Sec of State Raffensperger in which he berates, flatters, begs & threatens him with criminal consequences unless he confirms unfounded claims of fraud. Trump is a thug, corrupt to the core. https://t.co/XVnvipHpG6

This is monstrous, mad, corrupt by any conceivable definition. Trump should be removed from office tomorrow. https://t.co/dnAWPUZCJU

That taped phone call feels like a single cockroach on the rug that indicates there are a lot more in the walls.

The thing is, Trump has all along been doing the very thing he is accusing Democrats of: trying to fraudulently "find" votes where there are none and pressuring officials publicly and privately to arbitrarily swing the election in his favor in key swing states.

Now remember just how many conversations have gone down like that over the last four years that we don’t have audio for.

I’m no lawyer but this certainly feels criminal!https://t.co/ai7iIGM6cq