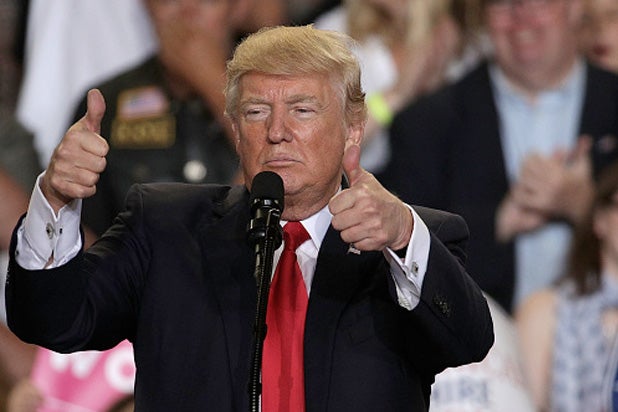 President Trump defended Press Secretary Sean Spicer during an interview with Fox News host Jeanine Pirro, saying, he is “a wonderful human being.”

In an interview that is set to air in full on Saturday, Pirro asked Trump if Spicer will continue to be his spokesman “tomorrow” on the heels of recent reports that the White House is not happy with the way the team handled news that now-former FBI Director James Comey was fired.

Pirro then pressed, asking Trump if Spicer is “in the woods” at the moment.

“No, he just gets beat up by these people and again you know they don’t show the 90 questions that they asked and answered properly. I’m saying if they’re off just a little bit, just a little bit, it’s the big story,” Trump said.

The Washington Post recently issued a correction after originally reporting that Spicer was hiding out “in the bushes” on the White House lawn Tuesday night as he prepared to answer questions from reporters about the firing of Comey. It seems he was simply “among” the bushes.

The story painted a picture of a flustered Spicer who was not prepared to answer on-camera questions regarding Comey’s sudden dismissal. CNN’s Jim Acosta tweeted on Wednesday that President Trump was “evaluating” Deputy Press Secretary Sarah Huckabee Sanders after Spicer’s “disaster” among the bushes outside the White House.

Also Read: Washington Post Corrects Story Because Sean Spicer Was 'Among' Bushes, Not 'In' Them

“We don’t have press conferences,” Trump said. “Unless I have them every two weeks and I do them myself, we don’t have them. I think it’s a good idea. First of all, you have a level of hostility that’s incredible and it’s very unfair. Sarah Huckabee is a lovely, young woman. You know Sean Spicer, he is a wonderful human being, he’s a nice man.”

Spicer has emerged as a household name because of his often-combative press briefings and high-profile gaffes. He is famously portrayed on “Saturday Night Live by Melissa McCarthy, who will host “SNL” this weekend.