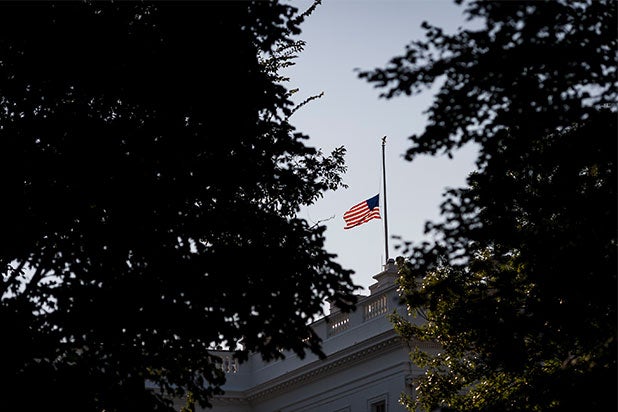 It’s been two days since Senator John McCain died, yet, in a break from tradition, flags at the White House are back at full-staff, and observers are outraged.

White House flags were lowered to half-staff on Saturday but put back up to full-staff on Monday, according to multiple media reports, including The Los Angeles Times. Meanwhile, flags at the U.S. Capitol remained at half-staff to honor the late Senator.

“The White House flag this morning: Any other president would order flags at half-staff to honor a senator, war hero and bipartisan legend like John McCain,” Poynter contributing editor David Beard wrote on Twitter.

NBC News White House Correspondent Geoff Bennett added, “The flags at the White House are back at full staff this morning. Traditionally, sitting senators who die in office have flags lowered in their honor from date of death until burial. And we’ve received no presidential proclamation for McCain.”

And TV personality Montel Williams tweeted, “Mr. President, lower that flag for John McCain. @realDonaldTrump, if you can’t step outside your own alternate reality where everything is about Trump, go back to New York and do the Apprentice.”

It is customary to fly flags at half-staff at all federal buildings and naval vessels for a senator on the day of death and the day after. Many outlets reported Monday that the fact that the White House rose its flag from half staff in less than 48 hours following McCain’s passing is a clear break from the longstanding tradition.

The U.S. Flag Code states that flags should be lowered “on the day of death and the following day for a Member of Congress.” But sitting presidents can issue a proclamation to extend that period. When Democratic Sen. Ted Kennedy of Massachusetts died in 2009, for example, former President Barack Obama ordered the flags to be at half-staff for five days, according to The Times.

“Yes, the flag code doesn’t require the White House to lower the American flag until John McCain’s interment. But decency does,” Andy Lassner, executive producer on “The Ellen Show” tweeted.

According to The Washington Post, President Trump declined to read a statement drafted by Sarah Huckabee Sanders and John Kelly, which praised McCain, and instead wanted to send a tweet. CBS News’ Mark Knoller noted that Trump did not issue a formal proclamation on McCain’s death.

Trump posted on Twitter on Saturday, writing, “My deepest sympathies and respect go out to the family of Senator John McCain. Our hearts and prayers are with you!”

In the Oval Office just now I asked @realDonaldTrump if he had any thoughts on the legacy on John McCain. He heard me but did not answer. pic.twitter.com/reVwoJCMzV

Former Republican presidential candidate McCain died of cancer on Saturday. He was 81. In July 2017, McCain underwent cranial surgery to remove a blood clot near his eye, and subsequent pathology revealed a brain tumor known as a glioblastoma. While continuing cancer treatment, he was hospitalized with a viral infection in December and again last spring with diverticulitis. Friday his family announced that the senator, “with his usual strength of will,” had “chosen to discontinue medical treatment.”

The White House has not yet responded to TheWrap’s request for comment.

pres trump – you are commander in chief by law, duty bound to honor sen mccain
ignoring his death is a disgrace

If you are outraged by the NFL players “disrespecting the troops & flag” by kneeling, but don’t have a problem with Trump refusing to allow the WH to release a statement honoring John McCain's service or fly the flag at half mast, you're a racist.

The White House flag this morning: Any other president would order flags at half-staff to honor a senator, war hero and bipartisan legend like John McCain https://t.co/0Cmhtc8kFW pic.twitter.com/bvE0YAo6J3

Since President Trump and this disgraceful White House won’t fly flag at half mast for John McCain I will do this for them. pic.twitter.com/mtozRncQJ3

Kneeling football players have nothing to do with military respect.

Raising the flag to full staff, while refusing to issue a presidential proclamation for former POW. John McCain, while attacking Gold-Star families, has everything to do with Military respect

The flags at the White House are back at full staff this morning. Traditionally, sitting senators who die in office have flags lowered in their honor from date of death until burial. And we've received no presidential proclamation for McCain.

Dear @SecPompeo: You served on active duty. As a nation mourns McCain, it would be appropriate to lower the flag to half staff at all @StateDept buildings. I respectfully request you give that order, regardless of the views of @realDonaldTrump. It is the honorable thing to do. https://t.co/yIllKANhMq

Mr. President, lower that flag for John McCain. @realDonaldTrump, if you can’t step outside your own alternate reality where everything is about Trump, go back to New York and do the Apprentice. https://t.co/LDaO9pAqy3

Trump has declined to lower the White House flag to honor John McCain. Obama ordered flags at half-staff more than any other president, which I wrote about a few years ago: https://t.co/dUMhR4cu7K

White House flag is no longer at half-staff in the wake of John McCain’s death but the 50 flags encircling the Washington Monument are. pic.twitter.com/OX5qqx72K8

Flag back at full staff atop WH. Pres Trump did not issue proclamation on the death of @SenJohnMcCain, which usually calls for flags to remain at half-staff through the day of interment, which is Sunday at the @NavalAcademy. pic.twitter.com/NGasNPT0VB