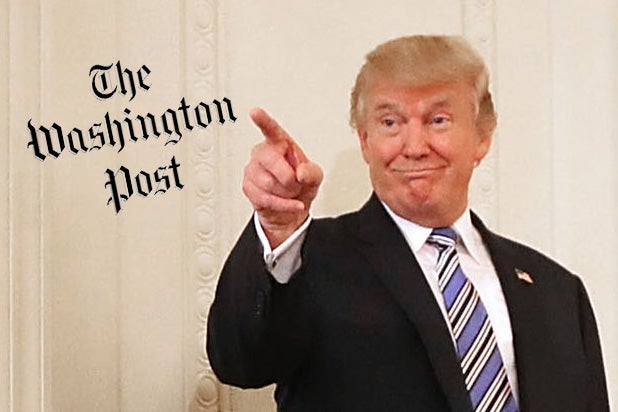 President Donald Trump took to Twitter on Tuesday to blast the Washington Post and accuse the paper of fabricating sources for an article saying he considered “rescinding” his nomination of Neil Gorsuch to the United States Supreme Court.

“A story in the @washingtonpost that I was close to ‘rescinding’ the nomination of Justice Gorsuch prior to confirmation is FAKE NEWS,” Trump tweeted.

“I never even wavered and am very proud of him and the job he is doing as a Justice of the U.S. Supreme Court. The unnamed sources don’t exist!”

A story in the @washingtonpost that I was close to “rescinding” the nomination of Justice Gorsuch prior to confirmation is FAKE NEWS. I never even wavered and am very proud of him and the job he is doing as a Justice of the U.S. Supreme Court. The unnamed sources don’t exist!

The Post story by Ashley Parker, Josh Dawsey and Robert Barnes cited “11 people familiar with the episode” who said that Trump was annoyed that Gorsuch distanced himself from the president’s attacks on the federal judiciary in his meetings with senators following his nomination.

According to the Post, the president “worried that Gorsuch would not be ‘loyal’ … and told aides he was tempted to pull Gorsuch’s nomination.”

In addition, the Post reported that Trump felt Gorsuch had not shown enough gratitude for the lifetime appointment.

The Washington Post hate comes just days after Trump blasted the paper and political reporter Dave Weigel for misrepresenting crowd sizes during a recent Trump rally in Florida. Trump called on Weigel to be fired.

.@DaveWeigel @WashingtonPost put out a phony photo of an empty arena hours before I arrived @ the venue, w/ thousands of people outside, on their way in. Real photos now shown as I spoke. Packed house, many people unable to get in. Demand apology & retraction from FAKE NEWS WaPo! pic.twitter.com/XAblFGh1ob

.@daveweigel of the Washington Post just admitted that his picture was a FAKE (fraud?) showing an almost empty arena last night for my speech in Pensacola when, in fact, he knew the arena was packed (as shown also on T.V.). FAKE NEWS, he should be fired.

“We stand by the story,” a spokesperson told TheWrap.