President Trump was greeted by chants of “lock him up” and resounding boos from a stadium filled with baseball fans at the World Series Game 5 in Washington, D.C. on Sunday evening.

The monitor at Nationals Park showed the president going from a broad smile to a serious expression as it became clear that the crowd was booing roundly when he was announced. 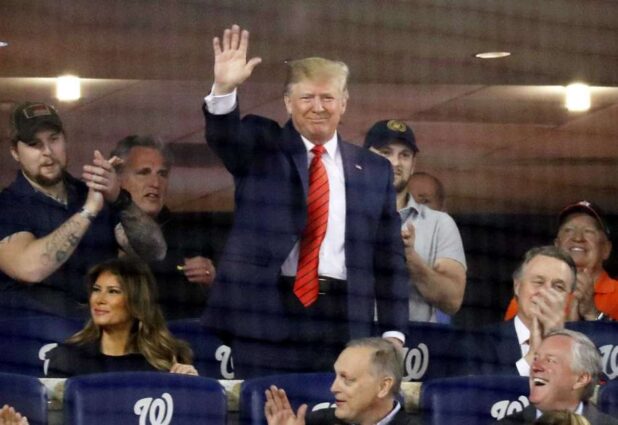 Later the crowd chanted “lock him up,” a favorite of Trump rallies, usually in reference to Democratic opponents. The chant follows days of revelations in the Democratic-led impeachment investigation in the House of Representatives.

The Houston Astros beat the Washington Nationals 7-1 as the best-of-seven series concluded its three games at Nationals Park. The Nationals had returned to their home park with a commanding two-games-to-none lead after winning the first two games in Houston, but the Astros swept all three weekend games in Washington to take a take a 3-2 series lead as the teams go back to Houston for the final two games on Tuesday and Wednesday. (Or just Tuesday, if the Astros win.)

In addition to the chants from the crowd, there were signs unfurled that read “Impeach Trump.”

Look how Trump’s face changes when he realizes an entire stadium is booing him pic.twitter.com/E46rzbzmbl

lmao the change from cheering to booing furiously to cheering again https://t.co/Cp7vZ8qxxX