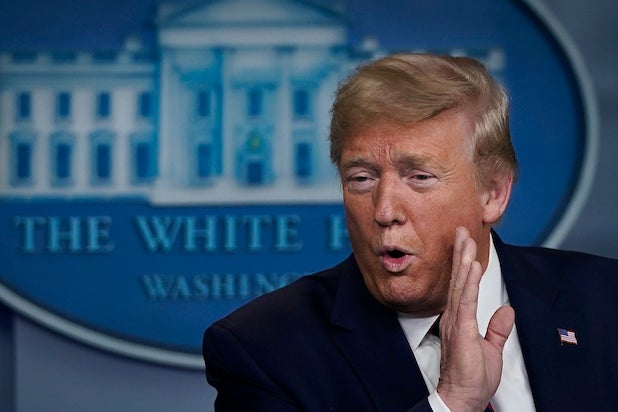 President Donald Trump triggered an avalanche of criticism Sunday when he touted the boom in cable news ratings while covering his coronavirus pandemic press conferences.

“SERIOUSLY? Nobody gives a sh*t about your ratings, Mr President. People are dying in their droves & the global economy is collapsing. Just focus on saving lives & jobs,” Piers Morgan, a frequent Trump supporter and former “Celebrity Apprentice” winner, wrote.

Also Read: Mitch Albom Calls on 'Baby in a Suit' Trump to Stop Name-Calling of Governors Amid Coronavirus Crisis

The backlash came after Trump quoted a New York Times article about the number of viewers tuning in to hear the latest about the pandemic from the president himself:

“President Trump is a ratings hit. Since reviving the daily White House briefing Mr. Trump and his coronavirus updates have attracted an average audience of 8.5 million on cable news, roughly the viewership of the season finale of ‘The Bachelor.’ Numbers are continuing to rise…

“..alone attracted 6.2 million viewers for the president’s briefing — an astounding number for a 6 p.m. cable broadcast, more akin to the viewership for a popular prime-time sitcom…

As of Sunday afternoon, confirmed cases of the coronavirus in the U.S. has surpassed 131,000, with more than 2,100 dead. Infectious disease expert Dr. Anthony Fauci has said that deaths in the U.S. could reach 200,000.

Trump went on to write, ” Because the “Ratings” of my News Conferences etc. are so high, “Bachelor finale, Monday Night Football type numbers” according to the
@nytimes, the Lamestream Media is going CRAZY. “Trump is reaching too many people, we must stop him.” said one lunatic. See you at 5:00 P.M.!”

And the flood gates were opened.

More than 2,000 Americans have now died, and the President hasn’t even tweeted about it.

Instead, this is what we get: https://t.co/TUsWYborXo

OH. MY. GOD. He's excited about his pandemic ratings. People are dying. https://t.co/zvci8Ewfbv

Sorry, is the ratings-tweet alone not grounds for the 25th amendment?

With all due respect, sir, you are a parasite.

Psychologists, what do you inferred by his referring to himself in the third person, please? #trump https://t.co/K1hFxycGtR

Shut him up. Shut him down. https://t.co/UaUHo4gtXJ

The ratings are higher because were HOME AF loser.
Dumb Animal is talking about ratings? https://t.co/ttXK8KxNik

Literally the shittiest possible person to be in charge right now https://t.co/de5IGYYvGq

… you're comparing a world wide pandemic to… the bachelor? Patting yourself on the back because people wanna stay alive is a new low.

We just passed 135,000 cases, more than any other country in the world.

2,300 Americans are dead so far and that number is bound to rise.

And Trump is currently gloating that his RATINGS are higher than the Bachelor.

Trump voters, honestly, do you not see how sick this is?