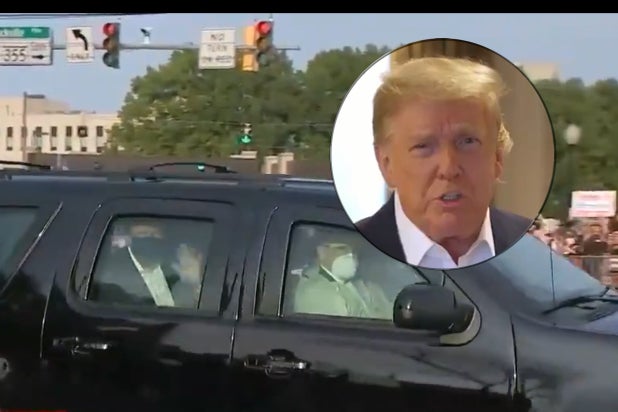 President Donald Trump released a new video hinting that he had a surprise for his supporters outside Walter Reed Medical Center, where he is being treated for COVID-19. Moments later, a motorcade of black Suburbans paraded the street, with a masked president inside, waving to the crowd and the cameras.

In a Sunday afternoon video, Trump thanked the medical staff at Walter Reed for their work tending to him. “I also think we’re going to pay a little surprise to some of the great patriots we have out on the street, and they’ve been out there for a long time, and they’ve got Trump flags, and they love our country,” he said.

Trump posted a new video shot from inside Walter Reed, saying that he was “getting great reports from the doctors” about his condition.

“It’s been a very interesting journey,” he said. “I’ve learned a lot about COVID. I learned it by really by going to school. This is the real school. This isn’t the ‘let’s read the book’ school. And I get it; I understand it.”

“Every single person in the vehicle during that completely unnecessary Presidential ‘drive-by’ just now has to be quarantined for 14 days. They might get sick. They may die. For political theater. Commanded by Trump to put their lives at risk for theater. This is insanity,” Dr. Phillips tweeted.

Those on social media, for the most part, agreed, taking immediate note of Trump’s decision to leave the hospital while still in treatment for the contagious virus that has taken the lives of more than 210,000 Americans.

“I really feel for those Secret Service agents. Trump just put their lives at risk for a PR stunt. But he considers them ‘losers’ and ‘suckers,’ so he doesn’t care,” Newsweek columnist Seth Abramson wrote.

“Everyone knows it’s the secret service’s job to stand perfectly still and smile while the president aims a gun directly at their heads,” Ashley Feinberg tweeted.

While Ahmed Baba posted, “I’m sure Trump unnecessarily leaving Walter Reed in a car with the windows up, putting his Secret Service officers at risk of COVID infection for yet another photo op, will do a lot to convince Americans he takes the pandemic he failed to contain seriously.”

The comments continue to flow in, including from some who say that it’s not Trump in the car, but rather a body double.

Earlier on Sunday, doctors said Trump responded well to treatment and his condition has continued to improve, enough so that he might be released from the hospital as early as Monday. They also revealed new details that the president’s condition was more serious than previously disclosed.