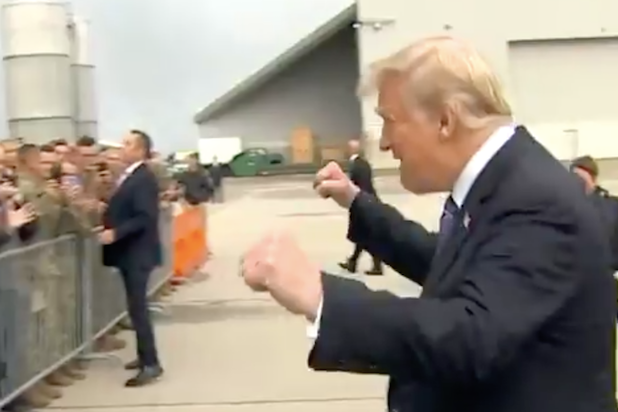 President Donald Trump appeared pretty energized as he stepped off Air Force One on Tuesday morning to attend a memorial for 9/11 victims in Pennsylvania — pumping his fists in a way that almost instantly got called out online.

Trump, after landing in Pennsylvania to honor the 40 passengers and crew members who died when United Airlines Flight 93 crashed outside Shanksville, Penn., walked over to a crowd of supporters and pumped both of his fists.

“Hello everybody. How are you?” Trump asked the crowd, before complimenting them. “What a good-looking group.”

Also Read: Miss America Contestant Slams Trump During Pageant: 'He Has Caused a Lot of Division'

Below is a look at the picture making the rounds, as well as video of Trump exiting the plane.

WATCH: President Trump greets supporters upon arrival in Johnstown, Penn., while en route to Shanksville to honor those who died aboard United Airlines Flight 93 when it crashed 17 years ago today during the 9/11 attacks. https://t.co/TI1qXHQQNO pic.twitter.com/Uum9rmdV9j

The president’s demeanor didn’t sit well with many on Twitter, however. “This is an abomination,” one user declared.

This is a photo of Trump moments ago arriving in PA to attend the Flight 93 September 11 Memorial Service. This. Is. Not. Normal. pic.twitter.com/HZX0dx4xKE

When your face says “Fuck yeah, 9/11,” and your body says “mashed potatoes” and your wife says “I died a long time ago and I am just bones and hair beneath a coat. I spend my nights shrieking into a threadbare stuffed animal I loved as a child.” pic.twitter.com/kHIlxbEjFd

Even actor Morgan Freeman called out Trump in a message to survivors and their families: “Please know that our country is with you even if our President is not.”

This is @realDonaldTrump greeting supporters as he arrives in PA to attend the Flight 93 #Sept11 Memorial Service. To all those who lost loved ones on this day 17 years ago, our hearts goes out to you! And please know that our country is with you, even if our President is not. pic.twitter.com/GVbfAS2iBJ

Trump's dementia on display when landing to attend the Flight 93 September 11 Memorial Service in Shanksville, PA

He has no idea what it means. His atrophied brain says "act important" "do something", so an inappropriate cheer is the output he produces.

He will get much worse. pic.twitter.com/cQU0aAu53Q

YEEEEEEAAAAAH! 9/11! We’re gonna mourn this tragedy TO THE MAX! pic.twitter.com/NCfBuoFVJv

Others compared it to President Obama’s reaction during previous memorial services.

President Trump, along with first lady Melania Trump, were heading to a service in memory of United 93.

The flight was heading west from New Jersey when it was highjacked by four terrorists that planned on crashing the plane in Washington, D.C.

Instead, the flight crashed in Pennsylvania after several passengers thwarted the hijackers’ plans to attack the nation’s capital. About 3,000 people were killed in the attacks on Sept. 11, 2001.