President Donald Trump’s assertion that young Black voters will “NEVER” vote for Joe Biden and “are voting for ‘TRUMP'” was met with cynicism by scores of social media users who reminded him of his call to have the Central Park Five executed even though they were cleared of the 1989 crime.

“Joe Biden called Black Youth SUPER PREDATORS. They will NEVER like him, or vote for him. They are voting for “TRUMP,'” the president wrote in a Sunday tweet. (Incidentally, it was Hillary Clinton who used that phrase, not Biden.)

Reaction came swiftly by many who pointed out to the president (and his supporters) that he took out a full-page ad in New York City newspapers calling for the reinstatement of the state’s death penalty to be “executed,” even after DNA evidence fully exonerated them.

“Since the Central Park 5 is trending, I’d like to remind folks that trump called for the DEATH PENALTY for these boys, who were framed by cops. After they were exonerated by DNA, he STILL wanted them punished,” one Twitter user wrote.

Also Read: 50 Cent Does a 180, Says He 'Never Liked' Trump After Chelsea Handler Chews Him Out

Another wrote: “Orange Agolf Twitler says black youth will only be voting for him. Remember when he called for the execution of the Central Park 5, 5 innocent young boys of color? I do.”

On April 19, 1989, five male teens were accused of gang-raping and nearly killing a white woman in New York City’s Central Park, thus named the Central Park jogger case. None of the suspects’ DNA matched the DNA collected from the crime scene, but the five young defendants were falsely accused of the crimes nonetheless. After serving out their sentences, they were all exonerated when a fellow inmate confessed to the crimes. They subsequently sued the City of New York for malicious prosecution, racial discrimination and emotional distress, as three of the them were Black or Latino. In 2014, the city settled the suit for $21 million.

The 1989 full-page ad with massive headline ran in The New York Times, The Daily News, The New York Post and New York Newsday, saying he wanted to “hate these muggers and murderers” and “they should be forced to suffer and, when they kill, they should be executed for their crimes.” It was signed by Donald Trump.

“I recently watched a newscast trying to explain the ‘anger in these young men’. I no longer want to understand anger. I want them to be afraid,” he wrote, making it clear he was voicing his opinion because of the rape and assault of the jogger in Central Park, without mentioning the five youths by name. He went on to say about the police, “Unshackle them from the constant chant of ‘police brutality’ which every petty criminal hurls immediately at an officer who has just risked his or her life to save another’s.”

He concluded, “Send a message loud and clear to those who would murder our citizens and terrorize New York City – BRING BACK THE DEATH PENALTY AND BRING BACK OUR POLICE.”

Dr. Eugene Gu, one of the Stanford trained doctors fighting the coronavirus pandemic, writes: “Joe Biden never called Black Youth “Super Predators.” That was Hillary Clinton. Get your false accusations right. Speaking of which, Trump falsely accused the Central Park 5 of rape and paid the New York Times and New York Post to publicly call for their brutal executions.”

While another tweeted a screengrab of an old Trump tweet which said that 97% of Blacks killed are by other blacks. “Remind people about this Trump’s tweet, a vicious lie intended to plant fear and hatred against blacks in 2016,” the user wrote.

When asked in 2019 about his harsh comments about the Central Park Five, he refused to apologize. 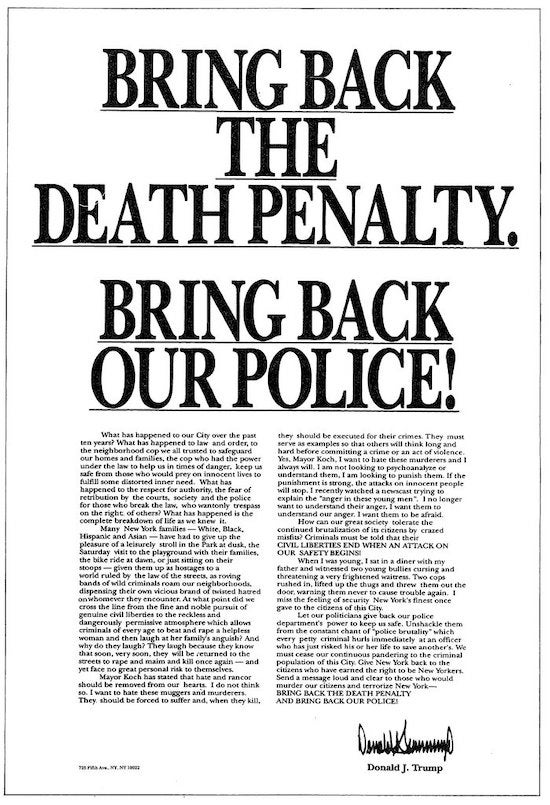