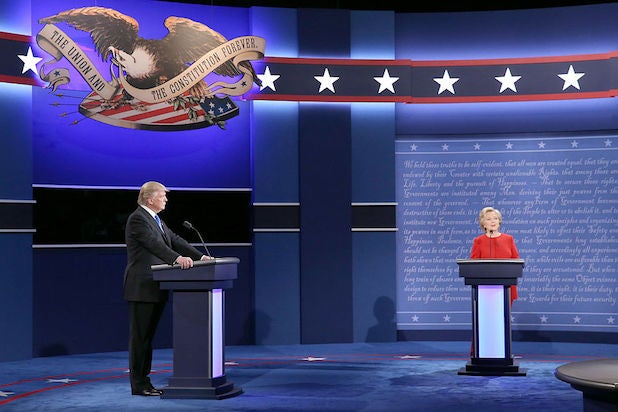 Sparks flew over jobs, ISIS and trade, with both candidates getting in some stinging one-liners throughout the night.

Here are the most memorable zingers from Monday night’s debate, ranked from worst to best:

8. After Clinton said she’s been thinking “quite a bit” about how to bring manufacturing jobs to the U.S., Trump interrupted her saying, “Yeah, for 30 years,” following up his previous comment: “For 30 years you’ve been doing it and now you are just starting to think of solutions.”

7. Trump slammed Clinton for flip-flopping on the Trans-Pacific Partnership trade deal, but Clinton didn’t seem to take the bait: “The facts are, I said I hoped it would be a good deal, but when it was negotiated, which I was not responsible for, I concluded it wasn’t,” Clinton said, later adding, “Donald, I know you live in your own reality, but that was not the facts.”

6. When given an opportunity to apologize for contesting President Obama’s nation of origin — better known as birtherism — Trump said, “I say nothing,” to which Clinton responded, “Just listen to what you heard,” to a chuckling audience.

5. After Trump tried to say that Clinton lacked the “stamina” needed to run the country, Clinton shot back,  “As soon as he travels to 112 countries and negotiates a peace deal, a cease fire, a release of dissidents, an opening of new opportunities in nations around the world, or even spends 11 hours testifying in front of a congressional committee, he can talk to me about stamina.”

The line got a YUGE cheer from the crowd.

4. After Trump condemned Clinton for giving rise to the Islamic State, Clinton shot back: “Fact checkers, get to work.”

3. Clinton at one point suggested that Trump would eventually “blame me for everything.”

“Why not?” Trump shot back.

1. Trump tried to slam Clinton for taking off from the campaign trial for debate prep saying, “You look at the inner cities — and I just left detroit and I just left Philadelphia — you’ve seen me, I’ve been all over the place … you decided to stay home, and that’s OK …”

Clinton shot back with perhaps the best line of the night: “I think Donald just criticized me for preparing for this debate. And yes, I did. And you know what else I prepared for? I prepared to be president.”