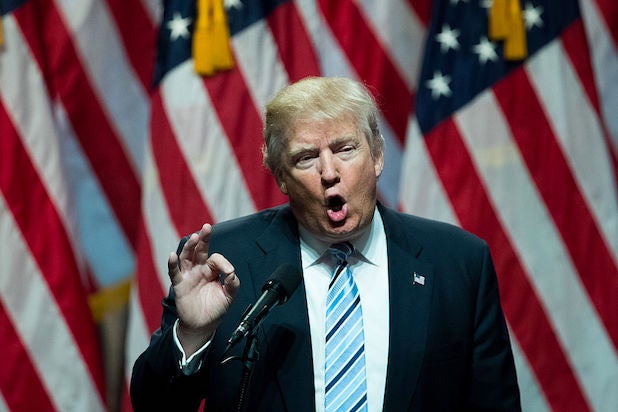 But watchdogs were quick to point out that the same numbers were mentioned on Fox News’ “Fox & Friends” shortly before the president’s tweet.

The media has not reported that the National Debt in my first month went down by $12 billion vs a $200 billion increase in Obama first mo.

Great optimism for future of U.S. business, AND JOBS, with the DOW having an 11th straight record close. Big tax & regulation cuts coming!

Media watchdogs wanted to make it clear that businessman former Republican presidential candidate Herman Cain mentioned the same information on air shortly before the president tweeted it, suggesting that the new president was watching his favorite morning show.

“Fox & Friends” co-hosts Steve Doocy, Ainsley Earhardt and Brian Kilmeade will travel to the White House for a sit-down interview with President Trump that will air on Tuesday, Feb. 28.

7:37am on @FoxAndFriends: Herman Cain cited these exact same stats. He said "the media's upset and ignoring important facts." https://t.co/AmqWNOMbQC

Would POTUS know, you know, anything, that wasn't said on Fox & Friends? pic.twitter.com/Rwba59yKtU

@brianstelter @foxandfriends It is pretty bad when a person can predict POTUS's next tweets by tuning in to FoxNews….

The guy has all the information in the world at his disposal and all he listens to is…@foxandfriends. https://t.co/ZqUGZ0SGM3

I heard Herman Cain on Fox&Friends say exactly this a couple of hrs b4 – Trump takg credit 4 Obama fiscal policies & we all kno 2009 was GFC https://t.co/KpSpmMha2H

I heard Herman Cain on Fox&Friends say exactly this a couple of hrs b4 – Trump takg credit 4 Obama fiscal policies & we all kno 2009 was GFC https://t.co/KpSpmMha2H

Herman Cain says something on Fox & Friends. Then #Trump retweets it. And he says we should get our facts from him and not the media. https://t.co/j0JQUpdkqA

Tuesday’s interview will be President Trump’s first morning show appearance since his inauguration. “Fox & Friends” has been friendly to the Trump administration, while cable news rivals “Morning Joe” and “New Day” attack POTUS on a regular basis.