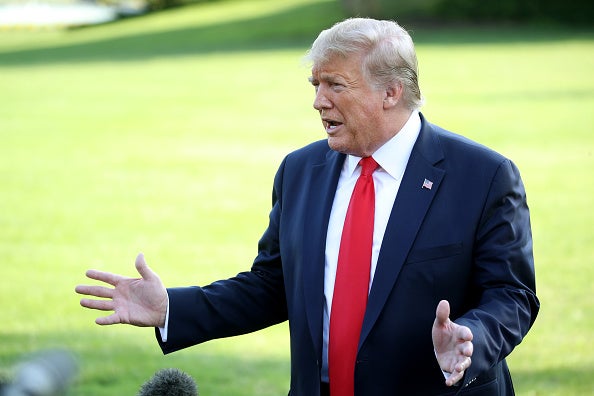 President Donald Trump attacked “the LameStream” media Friday in a Twitter tirade that came as Congress investigates whether it should begin the process of trying to impeach him.

“To show you how dishonest the LameStream Media is, I used the word Liddle’, not Liddle, in discribing Corrupt Congressman Liddle’ Adam Schiff. Low ratings @CNN purposely took the hyphen out and said I spelled the word little wrong. A small but never ending situation with CNN!” he began.

CNN spokesman Matt Dornic directed TheWrap to his own tweeted response: “By hyphen he means apostrophe. And by discribing he means describing. But I’m stuck on the difference between liddle and liddle’. Is liddle’ possessive? As in ‘self-owned?'”

Trump continued from there, going after the New York Times and focusing on reporter Peter Baker.

He wrote, “Obama loving (wrote Obama book) Peter Baker of the Failing New York Times, married to an even bigger Trump Hater than himself, should not even be allowed to write about me. Every story is a made up disaster with sources and leakers that don’t even exist. I had a simple and very..”

“…..nice call with with the new President of Ukraine, it could not have been better or more honorable, and the Fake News Media and Democrats, working as a team, have fraudulently made it look bad. It wasn’t bad, it was very legal and very good. A continuing Witch Hunt!”

The “very nice call” described by Trump is actually one that led House Speaker Nancy Pelosi to announce an impeachment inquiry into the president.

The decision to begin the inquiry came after a whistleblower complaint that Trump sought to use foreign power from Ukraine during a phone call for his own political gain. During the call with Ukraine’s president, Volodymyr Zelensky, Trump urged Zelensky to investigate Joe Biden’s son.

Trump later told reporters that he did so because “we don’t want our people like Vice President Biden and his son creating to the corruption already in the Ukraine.”

A representative for the New York Times did not immediately respond to a request for comment.