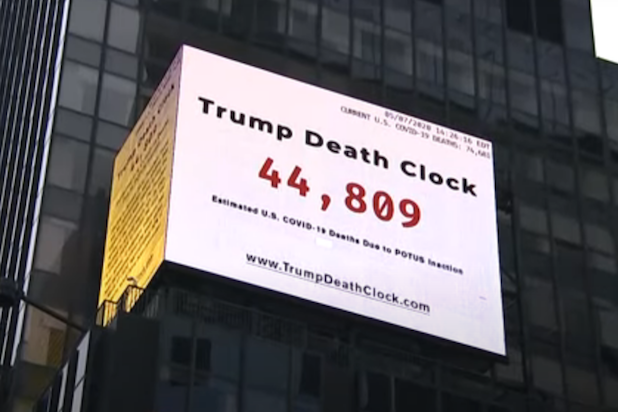 Documentarian Eugene Jarecki is putting a number on the lives lost by the White House’s slow and inadequate address to the coronavirus pandemic. This is the Trump Death Clock. High above an eerily empty Times Square sits a digital billboard displaying a red number that rises higher and higher as each moment passes, informing the ravished metropolis of the damage done.

His reason for the billboard: “I just want to focus right now on doing whatever I can to help push this country off of the track it is on right now, because we are under a government that is showing no accountability to the people,” he told TheWrap. “If we continue down this unsustainable path, I don’t see us living much longer in a country, or even a world to enjoy movies in.”

Jarecki has won multiple Sundance and Peabody awards for his investigative documentaries, including his 2005 exposé on the military-industrial complex “Why We Fight” and his look into the damaging impact of the War on Drugs in 2012’s “The House I Live In.” But he tells TheWrap that films are the last thing on his mind right now.

The inspiration for the Trump Death Clock came from two sources. First, the National Debt Clock, a running count of the U.S. federal deficit set up near Times Square and which has been running for over 30 years. “I’ve always been struck by how it’s able to convey a political message in such a simple yet effective way with a constantly ticking number,” he said.

The other came from a study from epidemiologists Britta and Nicholas Jewell that was published in the New York Times last month. They found that if President Trump had introduced federal social distancing guidelines on March 9, one week earlier than he did, then the spread of coronavirus could have been reduced so much that the final death toll in the U.S. could have been reduced by 60%. Jarecki spoke with other epidemiologists who agreed with the Jewells’ assessment.

“I chose that study and that 60% figure because I wanted to pinpoint a precise period in time in which this president’s decisions have had an impact on human lives, and something above partisan debate.” Jarecki said.

“Some have said that Trump should be blamed for more deaths and, of course, his supporters say China should be blamed. But every epidemiologist I spoke to agreed with the Jewell assessment that given the exponential nature of how this virus spreads, there is no debate that the Trump’s administration’s dithering at a critical period from March 9-16 allowed this virus to take a deeper hold in this country, and had he acted earlier, thousands of lives could have been saved.”

The Emmy and Peabody award-winning director used this to launch a website Trump’s Death Clock that displays a number equal to 60% of the estimated deaths from COVID-19 in the U.S. as tallied by the COVID Tracking Project. Encouraged by friends, he started a crowdfunding campaign to put that figure on a digital billboard in Times Square. On Friday, May 8, the Trump Death Clock went live in New York City, and since then the number of deaths it shows has risen by over 4,000.

Jarecki hopes that the clock will inspire others to make similar public displays and spread the demand for accountability from the White House. He says that he is reaching out to others who want to take the Trump Death Clock and project it onto buildings in other U.S. cities.

“The irony is that the clock is currently sitting among giant, glowing billboards selling products to an audience that isn’t there anymore because our political system, which serves the companies that put up those billboards, has failed the citizenry it is supposed to serve,” Jarecki said.

“And yet more people are going to see it in New York and hopefully other public spaces because this president has decided to reopen the country against even his own model from the CDC, and just as how he allowed unnecessary death and suffering to unfold at the onset of this pandemic, he will be responsible for it on the other side.”