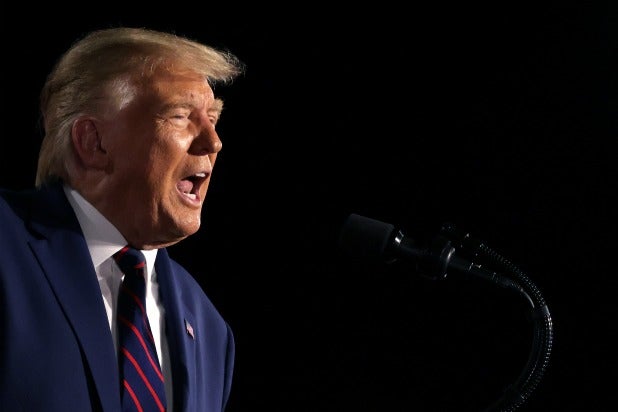 President Trump defended the 17-year-old vigilante charged with murdering two people at a protest in Kenosha, Wisconsin, telling reporters on Monday that the teen “was in very big trouble” and “probably would’ve been killed.”

When asked by a reporter at the White House whether he would “condemn the actions of vigilantes like Kyle Rittenhouse,” Trump said, “That was an interesting situation. You saw the same tape as I saw, and he was trying to get away from them, I guess, it looks like, and he fell, and then they very violently attacked him.”

Rittenhouse faces five felony counts — including for first-degree reckless homicide and first-degree intentional homicide stemming from the killings of two protesters — and one misdemeanor count. An attorney for Rittenhouse has argued that the shootings were done in self-defense.

The incident took place last week at a protest in response to the police shooting of Jacob Blake. According to footage and eyewitness accounts, Rittenhouse was initially seen carrying a rifle and standing around the protests but not directly in them. Later, a group of people begins chasing Rittenhouse and, after the sound of gunfire, Rittenhouse shoots at some of the people chasing him, according to footage taken at the scene. A second round of shooting takes place shortly after, as a group of people chase him. After tripping and falling, Rittenhouse fires at the group. Footage also shows that Rittenhouse then walks toward law enforcement vehicles with his hands up in apparent surrender, but the officials drive past him and do not arrest him.

President Trump does not condemn the actions of Kyle Rittenhouse, the teen charged with killing two protesters in Kenosha, saying "that was an interesting situation" and "I guess he was in very big trouble" https://t.co/Nj065CIsxp pic.twitter.com/i8aPSboPOT