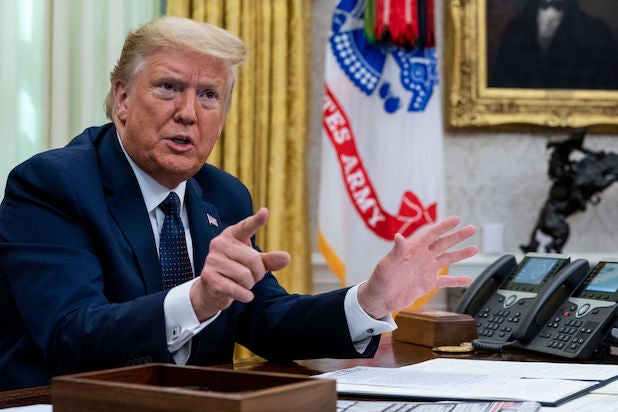 The Department of Commerce (DOC) has formally petitioned the Federal Communications Commission (FCC) to review and narrow the interpretation of Section 230 of the Communications Decency Act — which currently protects platforms like Facebook and Twitter from being sued for content their users post — and impose new regulations on social media platforms.

The petition, sent to the FCC on Monday, was requested as part of President Donald Trump’s executive order in May that called for new regulations against social media companies that moderate or censor the content users post on their respective platforms.

Currently, Section 230 states that “no provider or user of an interactive computer service shall be treated as the publisher or speaker of any information provided by another information content provider” and that none of these platforms can be held liable for “material that the provider or user considers to be obscene, lewd, lascivious, filthy, excessively violent, harassing, or otherwise objectionable, whether or not such material is constitutionally protected.”

In practice, Section 230 has protected platforms like Facebook, Twitter and YouTube from being sued if, for example, they take down a video sharing unsubstantiated medical advice about COVID-19, ban a user for posting content that violates the company’s guidelines or if a user publishes a post defaming another person on their respective platforms.

The petition also asks the FCC to clarify how “speaker” and “publisher,” “in good faith” and “objectionable” content are defined, as well as mandate “disclosure for internet transparency similar to that required of other internet companies, such as broadband service providers.”

“Social media and its growing dominance present troubling questions on how to preserve First Amendment ideals and promote diversity of voices in modern communications technology. Social media’s power stems in part from the legal immunities granted by the Communications Decency Act of 1996,” the petition states. “The FCC should use its authorities to clarify ambiguities in section 230 so as to make its interpretation appropriate to the current internet marketplace and provide clearer guidance to courts, platforms, and users.”

It’s not immediately clear what would come of this request, however. As TheWrap previously reported, the FCC does not have the authority to set out how Section 230 is interpreted. FCC Commissioner Geoffrey Starks also said that Congress has not given the FCC “any role” to carry out what the petition requests.

“Section 230 is best understood as it has long been understood: as an instruction to courts about when liability should not be imposed,” Starks said in a statement. “Even if there were a role for the FCC, adopting these rules now would be a terrible idea. Congress laid out Section 230’s original scope, and Congress should decide whether to change it.”

Starks also said the petition’s proposed regulations were “troubling” and “failed to grasp how vast and diverse the ecosystem of interactive computer services is.”

“Every comment section on the Internet would be subject to scrutiny. Imposing intermediary liability on those services–or creating an environment in which those services have an incentive not to moderate content at all–would prove devastating to competition, diversity, and vibrant public spaces online,” Starks said. “I continue to believe that these rules reflect the President’s attempt at retaliation and intimidation–at the very time when social media companies’ decisions could impact his own electoral future. This dark cloud over online free speech will cast a lingering shadow on our elections. The FCC should act quickly to end this unfortunate detour and get back to the critical work of closing the digital divide.”