Former President Donald Trump has had his fair share of public gaffes — from Tim Apple to covfefe — but somehow managing to wear his suit pants backward at a recent rally isn’t one of them.

A video made the rounds on social media this weekend that appeared to show Trump wearing pants without a fly on them and badly wrinkled. Immediately, people seized on what they thought was a perfect meme moment, comparing him to Kris Kross (you know, the dudes who actually did make wearing pants backward fashionable).

Unfortunately for Trump’s critics, that does not appear to be the case. The fact-checking site Snopes did us all a service and watched the 90-minute speech Trump gave and was able to prove through visuals of the speech and Getty Images from the event that Trump was indeed wearing his pants right. They were, however, unmistakably and oddly wrinkled. 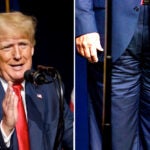 “Tabloid news publications like TMZ and Metro showed zoomed-in videos of the billionaire’s crotch area, and some social media users took to Twitter to mock Trump, suggesting that the 74-year-old had unintentionally put his pants on backward at the North Carolina GOP convention,” Snopes wrote, noting “the photographs were so popular that they trended on Twitter under #TrumpPants.”

Snopes noted that multiple sites had proof that Trump was indeed properly dressed: “Video posted by C-SPAN of the 90-minute speech also showed the former president wearing pants the right way. As such, we rate this claim as ‘False,'” Snopes said.

In his address on June 5, Trump doubled down on claims that he is still the “real president” and that the 2020 election was fraudulently “stolen” from him. CBS reported Trump teased a 2024 reelection, and said that year is one he is “very much looking forward to.”

Trump also said in the speech that he believes “the survival of America depends upon our ability to elect Republicans at every level, starting with the midterms next year.”