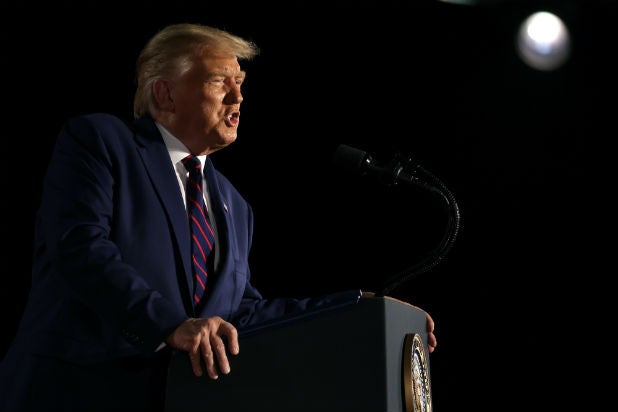 “Iran knows that, and they’ve been put on notice: If you f— around with us, if you do something bad to us, we are going to do things to you that have never been done before,” the president said. “They know if they do anything against us they’ll pay a thousandfold problem. They’re gonna have a thousandfold difference because they know now that we have things that we never had before.”

The expletive was aired uncensored in video footage of Limbaugh recording the show in the studio, but a delayed broadcast of the show censored the word due to FCC rules on profanity.

Also Read: Pelosi Introduces Bill to Give Congress a Say in Invoking the 25th Amendment

Limbaugh’s Friday show was marketed as a MAGA “radio rally” for Trump, who called in for two hours. It was the latest sign of the president’s attempts to reactive his re-election campaign since he was hospitalized last weekend for treatment after contracting COVID-19. On Thursday morning, Trump gave a phone interview with Maria Bartiromo on Fox Business, followed by an evening call-in interview on Sean Hannity’s show. On Friday night, Trump is also expected to appear on-camera for Tucker Carlson’s show on Fox News.

Trump on Rush Limbaugh: "Iran knows that, and they've been put on notice: If you f— around with us, if you do something bad to us, we are going to do things to you that have never been done before"

During Limbaugh’s show, Trump also said that Iran is “dying to have me lose.” Bill Evanina, director of the National Counterintelligence and Security Center, said in August that U.S. intelligence sources indicated that both China and Iran were seeking to influence the U.S. election against Trump while Russian sources were continuing their 2016 efforts on behalf of the president.