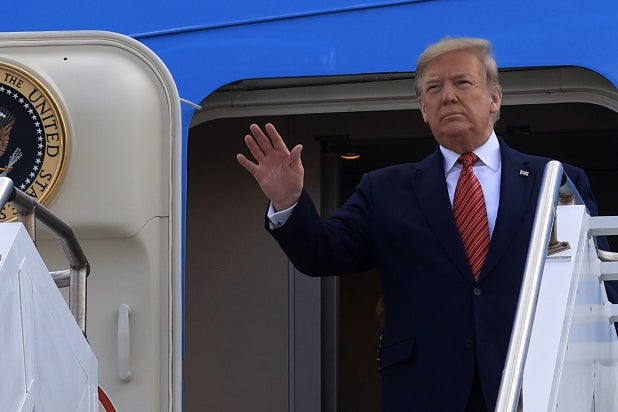 President Donald Trump is thinking about the possibility he’ll lose the presidency to Joe Biden and what his future will hold if he does. “Maybe I’ll have to leave the country, I don’t know,” Trump told the crowd Friday night at a Georgia rally.

Trump hit the campaign trail Friday, traveling to neighboring states Florida and Georgia for one last attempt to energize undecided voters. The POTUS went all-in on attacking his Democratic opponent, saying, “Lock up the Bidens, lock up Hillary [Clinton]” to his cheering Macon, Georgia, fans. But it was his comments he said in jest that captured the attention of everyone at the rally and, therefore, everyone on social media.

Check out the clip below.

Trump, speaking in Macon, has made amplifying a Russian disinformation campaign against the Bidens a centerpiece of his reelection rallies pic.twitter.com/XO3E9Y56BN

With less than three weeks to Election Day, Trump’s poll numbers continue to shrink, with Biden leading by 11 percentage points nationally, 53% to 42%.

The video of Trump saying that at his rally went up on Twitter, and the reactions to him leaving the U.S. — mostly in glee, we might add — started to pour in.

“The future of the Trumps after they flee into exile in a country with no extradition treaty,” Mark Gray wrote, accompanied by a Photoshopped image of the president, first lady and his three eldest children with a “Ringling Bros. Barnum & Bailey” portraits logo.

“Many people are saying Guantanamo is nice at that time of year…,” David Reiss, M.D. commented.

Jonathan Gaffney tweeted, “Oh God. As soon as Joe Biden voices the words, ‘So Help Me God,’ Trump’s passport is going to be pulled and his cell phones tapped. He is as big a Security Risk as exists in the United States today.”

And Hermione Rufflebum pointed out what many were thinking: “Candidates who lose don’t have to leave the country. Candidates who know they are criminals who will no longer be protected by the presidence [sic]… probably, yeah.”