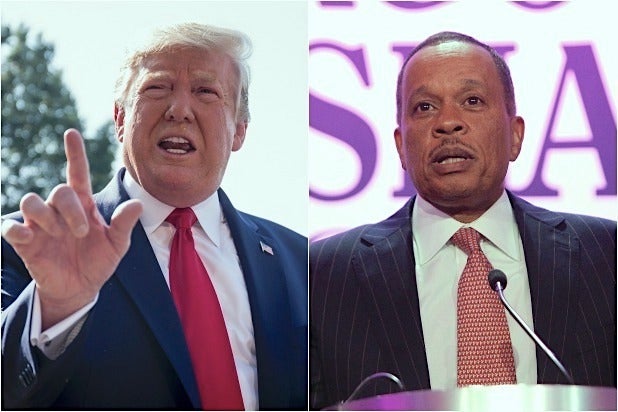 Donald Trump’s Twitter rants against Fox News took a specific target Sunday, as he panned Juan Williams, a frequent critic of the president on the network’s panel show “The Five.”

“Juan Williams at @FoxNews is so pathetic, and yet when he met me in the Fox Building lobby, he couldn’t have been nicer as he asked me to take a picture of him and me for his family,” the president tweeted. “Yet he is always nasty and wrong!”

Williams’ most recent criticism of the president came during a panel discussion on “Fox News Sunday” about Trump’s ongoing trade war with China. The POTUS’ announcement this past week that he would back off a new round of tariffs against China caused severe volatility at the domestic and global stock markets, increased fears of an impending economic recession, and is believed to have been a factor in a 700-point drop on the Dow Jones industrial average.

“I think that what you see here is that Trump’s unpredictability…risks global recession,” Williams said. “I mean, clearly, unpredictability is something that really scares Wall Street, because it depresses the likelihood of capital investment, which is necessary for stock growth.”

Sunday afternoon the POTUS criticized the network over its recent polling, which showed a rise in his disapproval rating, as well as the growing lead of his Democratic rivals over him in head-to-head polls the 2020 presidential election.

When reporters questioned the president about those latest polls Sunday, he said, “Fox has changed, and my worst polls have always been from Fox. There’s something going on at Fox. I’ll tell you right now. And I’m not happy with it.”