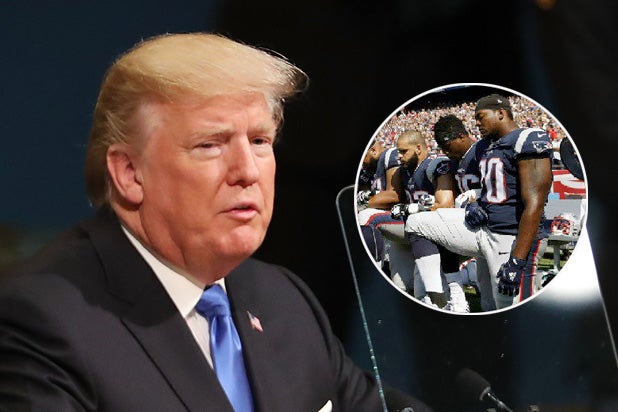 President Donald Trump on Tuesday launched his fifth straight day of criticism of professional athletes who protest during the national anthem, tweeting about the “great anger” Americans feel about the issue.

He also repeated a call for the National Football League to issue a new rule barring such protests — something that team owners have rejected in part because it would likely require renegotiating its agreement with the players union.

“The NFL has all sorts of rules and regulations. The only way out for them is to set a rule that you can’t kneel during our National Anthem!” Trump tweeted.

The NFL has all sorts of rules and regulations. The only way out for them is to set a rule that you can't kneel during our National Anthem!

Also Read: Colbert to Trump: NFL Protest 'Has Everything to Do With Race, Just Like Your Presidency'

He also commented on Monday night’s game between the Dallas Cowboys and the Arizona Cardinals, saying the booing in the stadium when the Cowboys knelt “was the loudest I have ever heard. Great anger.”

He also slammed the NFL for ratings that were “way down except before game starts, when people tune in to see whether or not our country will be disrespected.”

In fact, though, ESPN’s “Monday Night Football” boasted a 63 percent increase in preliminary ratings compared to last year’s, according to the network.

The booing at the NFL football game last night, when the entire Dallas team dropped to its knees, was loudest I have ever heard. Great anger

Ratings for NFL football are way down except before game starts, when people tune in to see whether or not our country will be disrespected!

Trump began his attack on the NFL at a rally in Alabama on Friday when he called a player who chose to kneel during the antem a “son of a b—-.”

After Trump’s comments on Friday and throughout the weekend, coaches, team owners and players responded by kneeling or locking arms during or just before the anthem, and some teams opted to stay in the locker room altogether.