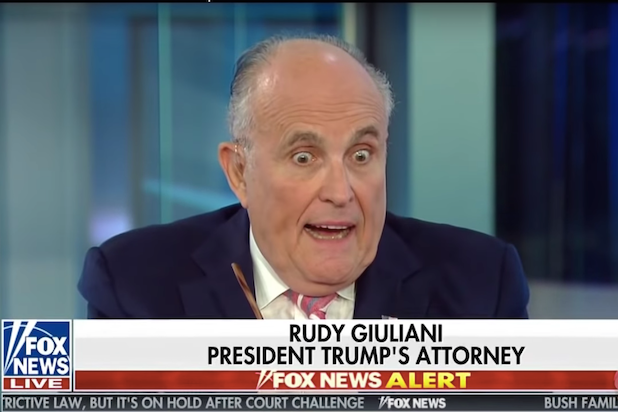 Sean Hannity shared on Twitter Friday that he is taking the day off from his regular radio program and handing over the reins to President Trump’s legal team.

“.@JaySekulow and Rudy Giuliani will be guest hosting for me today on radio,” said the real estate baron and Fox News host

.@JaySekulow and Rudy Giuliani will be guest hosting for me today on radio… “The depth of corruption that led to this investigation and that frankly continues to permeate this investigation is unprecedented…" https://t.co/XtMIIN7Ylr

The two men represent a sizable chunk of President Trump’s legal team in his high stakes contest with Special Counsel Robert Mueller. Giuliani, a former New York City mayor, has increasingly become the public — bulging eyed — face of the team with near daily appearances on Fox News and elsewhere.

His record on that score has been mixed. While Giulinai has won praise from Trump for his in-your-face aggressive style, he’s also been responsible for some high profile flubs, including a seemingly accidental admission on Sean Hannity in May in which he admitted that President Trump has repaid Michael Cohen they money he gave Stormy Daniels for the NDA she signed with him in October, 2016.

Though often overshadowed by his more famous television show on Fox News — the highest-rated cable news program on television — Hannity got his start in radio and is still a regular on the airwaves. In recent days his show has hosted President Trump and Twitter chief Jack Dorsey.