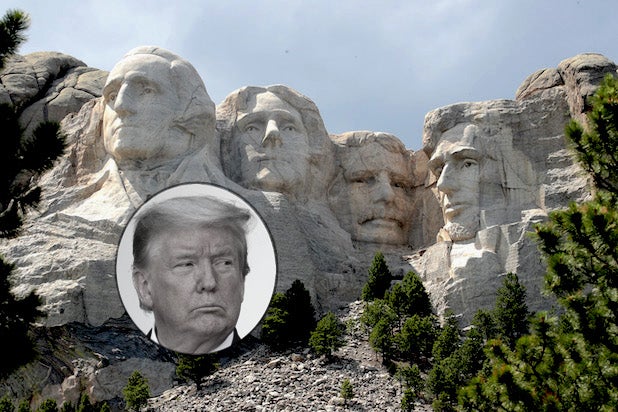 The questions came after Noem, a Republican, met Donald Trump at the White House in 2018 during her gubernatorial campaign. In an interview with South Dakota newspaper Argus Leader at the time, Noem said that he asked her about adding his face to the monument.

“I shook his hand, and I said, ‘Mr. President, you should come to South Dakota sometime. We have Mount Rushmore,'” she told the paper. “And he goes, ‘Do you know it’s my dream to have my face on Mount Rushmore?'”

“I started laughing,” she said. “He wasn’t laughing, so he was totally serious.”

But apparently the president might have been serious after all. And the Times reported that when Trump visited Mount Rushmore last month as part of his Fourth of July tour, Noem presented him with a four-foot replica of Mount Rushmore with Trump’s face added to it.

Late Sunday, Trump tweeted that the Times report was “fake news” — but added, “sounds like a good idea to me!”

Mount Rushmore has become a target of criticism among Native Americans, particularly the Cheyenne River Sioux Tribe, on whose land the monument was built.

“Nothing stands as a greater reminder to the Great Sioux Nation of a country that cannot keep a promise of treaty then the faces carved into our sacred land on what the United States calls Mount Rushmore,” said the tribe’s chairman, Harold Frazier. “The United States of America wishes for all of us to be citizens and a family of their republic yet when they get bored of looking at those faces we are left looking at our molesters.”

During his Fourth of July speech, Trump defended Mount Rushmore: “As we meet here tonight there is a growing danger that threatens every blessing our ancestors fought so hard for,” he warned. “Our nation is witnessing a merciless campaign to wipe out our history, defame our heroes, erase our values and indoctrinate our children.”