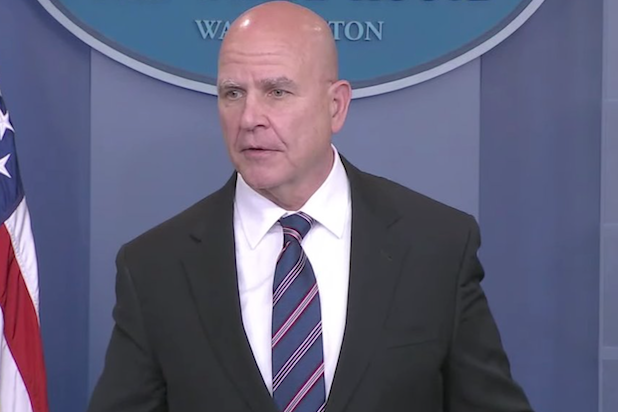 “National security has been put at risk by those violating confidentiality, releasing information to the press that can be used… to make American citizens and others more vulnerable,” McMaster said after reiterating his claim that Trump did nothing wrong. “The premise of that article is false,” he said.

The White House pulled an audible on Tuesday to have McMaster address press in the White House briefing room. Press Secretary Sean Spicer’s previously scheduled briefing was been moved to an off-camera gaggle later in the afternoon.

McMaster did not specify if Trump actually revealed classified information and political Twitter doesn’t seem happy with his comments.

McMaster seems to be confirming a lot of the Post story's actual substance, just saying it was "wholly appropriate"

McMaster is both saying they will look into the leaks a day after calling the stories "false." That answer has changed.

So did McMaster point out a single thing inaccurate about that Washington Post story? I didn't hear it.

McMaster doesn't deny:
1. That Trump relayed classified info from an ally to Russians
2. That Trump named a city

???? McMaster: “The president wasn’t even aware of where this information came from.” pic.twitter.com/Q9C7FT62mz

Earlier Tuesday, Trump took to Twitter to say he had the right to share “facts” with Russia but did not address reports that the information was classified.

The Washington Post on Monday reported that Trump revealed highly classified information to Russian officials during a White House meeting last week. The information, which was provided by a U.S. partner, was apparently so sensitive, some details have been withheld from allies and restricted even within the U.S. government.

The Post quoted former and current U.S. officials, who said Trump’s disclosures “jeopardized a critical source of intelligence on the Islamic State,” and the story was quickly matched by a variety of news organizations.

McMaster first dismissed the report, calling it “false,” during a quick statement shortly after the Post published the news.

“I stand by my statement that I said yesterday,” McMaster said on Tuesday.

Last week’s meeting, which included Trump, Russia’s ambassador Sergei Kislyak and Foreign Minister Sergey Lavrov, was closed to the media except for a Russian photographer. Photos from the meeting sparked a media firestorm after they were published by Russian state media.

The Post reports that Trump’s disclosure could have severe consequences because the partner who passed on the intel did not give the U.S. permission to share the material with Russia. Officials quoted in the story said Trump’s decision to reveal it to the Russians “endangers” cooperation from an ally that has access to the inner workings of the Islamic State.

“This is code-word information,” a U.S. official familiar with the matter told the Post, referring to one of the highest classification levels used by American intelligence agencies. Trump “revealed more information to the Russian ambassador than we have shared with our own allies.”