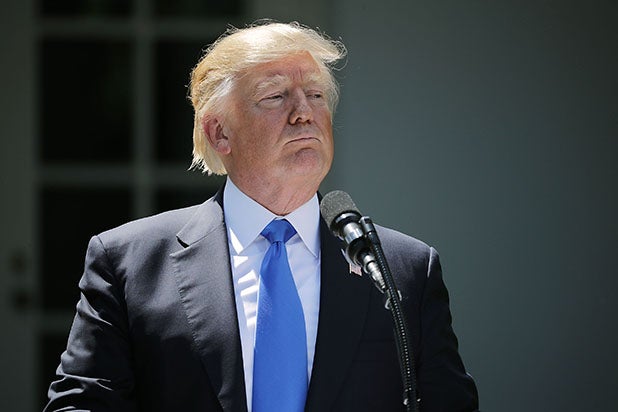 During the first Los Angeles trip of his presidency, Donald Trump isn’t expected to spend the night at the Beverly Hills Hotel — even though he once praised it in a 2011 feature entitled “My Favorite Place.”

“I have a house in Beverly Hills, but if I’m just going for a quick hop, I check in to the Beverly Hills Hotel. It’s easier because the hotel has everything I could possibly need and the staff really knows how to take care of a guest. They always make sure to have a room available for me, even if I’m arriving on the night of the Academy Awards,” Trump told Travel + Leisure.

Unfortunately, the hotel has recently gotten some less-helpful media attention: reports that Trump met there, on separate occasions, with Stormy Daniels and Karen McDougal, two women with whom he’s been accused of conducting extramarital affairs. (He denies both.)

The New Yorker reported that McDougal said her first date with Trump was in a private bungalow at the 105-year-old Beverly Hills Hotel, which is known for its cheery pink-and-green color scheme. Located on Sunset Boulevard, it has also occupied a fond place in the hearts of movie stars since Hollywood’s golden age.

“I was so nervous! I was into his intelligence + charm. Such a polite man,” McDougal wrote in a handwritten document obtained by the magazine. “We talked for a couple hours – then, it was ‘ON’! We got naked + had sex.” She said Trump offered her money, which she refused, and that he replied, “You are special.'”

In a lawsuit last week, Daniels contended that during an affair that stretched across 2006 and 2007, she had “at least one ‘meeting’ with Mr. Trump in a bungalow at the Beverly Hills Hotel.”

You can imagine the negative press if Trump elected to stay at the same hotel where he is accused of carrying out two affairs.

So where is Trump staying?

He hasn’t said. But the Los Angeles Times obtained a message sent last week to tenants at the Wilshire Grand Center, the highest building west of the Mississippi River. The message warned that a “VIP/high security visitor” would be staying at the InterContinental Los Angeles Downtown Hotel, located in the building.

While the dizzying heights might remind him of his own penthouse at Manhattan’s Trump Tower, the Intercontinental wouldn’t be as convenient as the Beverly Hills Hotel.

Trump’s last scheduled event Tuesday is a Republican fundraiser in Beverly Hills. While the exact location hasn’t been released, anything in the Beverly Hills city limits would be closer to the Beverly Hills Hotel than the Intercontinental, located about 10 miles east.

Stormy Daniels won’t be at the Beverly Hills Hotel tonight, either. Her lawyer told TheWrap she is out of town.