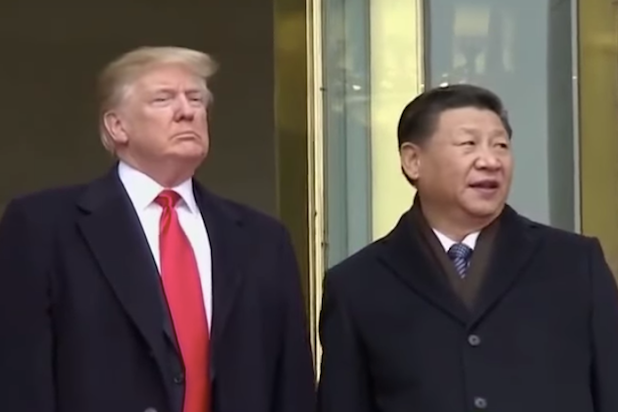 President Donald Trump is in China visiting with his counterpart there, President Xi Jinping. During a joint press conference Wednesday, Trump declined to take questions, acceding to a request from his Chinese hosts.

“It was at the Chinese insistence that there were no questions today,” said White House Press Secretary Sarah Sanders, media on the ground reported.

Asked why President Trump didn’t take questions from reporters today, Sarah Sanders said, “It was at the Chinese insistence there were no questions today.”

The request was likely not a difficult one to grant for the media-bashing U.S. president — especially given that his predecessor Barack Obama also declined to take questions with then-Chinese President Hu Jintao during his first visit in 2009.

7/ but to all those former OBAMA aides out there heralding how great he was on this issue: In 2009 Obama didn’t take questions while in China with President Hu. “Today’s event had been described as a press conference, but no questions were allowed.”https://t.co/hhUlIt3QIl

The Obama-era precedent, however, went largely overlooked on Twitter, as breathless journalists and blue-check politicos puffed their feathers and unloaded a fusillade of disdain against Trump.

One person who forgot the 2009 Obama visit was his former press secretary Jay Carney, who called Trump’s decision not to take questions an “embarrassing capitulation.”

The Chinese try this every time. It’s a test of will and principle. Letting them dictate press access is an embarrassing capitulation. https://t.co/uIaEWhcpgF

CNN White House correspondent Jeremy Diamond beat a hasty retreated after he tweeted falsely that Trump was the first president not to take questions since George H.W. Bush.

Trump is the first president since GHW Bush to NOT take questions from press during trip to China.

And things pretty much went from there.

Mr. President, we have a First Amendment whether China (and you) like it or not. https://t.co/ekO3RTp8hJ

Trump pledged to turn around and leave China if they didn’t have a staircase for him to get off AF1.

But he buckles instantaneously when they insist on no press questions

Trump and Xi take no questions from reporters at joint statement, effectively rolling back the small gain in press access Obama won in 2014 when Xi took one from US reporter.

China isn’t supposed to have a say about press access. Previous press secs used to fight with Chinese counterparts for press access when in China. Witnessed personally. https://t.co/IWMgOoy7ZB

Chinese leaders NEVER want to take questions from the press. Reporters were able to ask questions during Obama/Xi press briefings because the admin negotiated & pushed for Q&A on principle. The Trump administration plainly did not do the same. https://t.co/bRcZzTOmDT