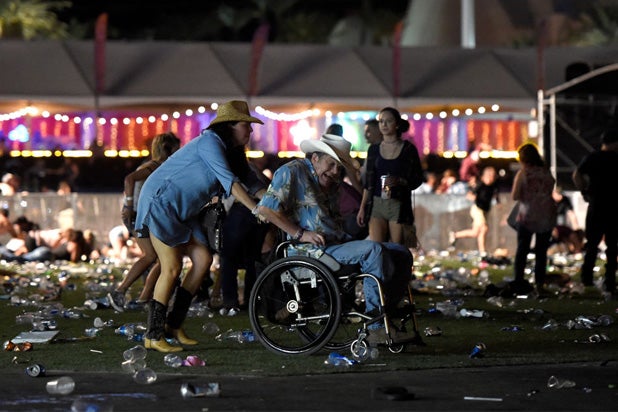 “My warmest condolences and sympathies to the victims and families of the terrible Las Vegas shooting,” the president tweeted. “God bless you!”

My warmest condolences and sympathies to the victims and families of the terrible Las Vegas shooting. God bless you!

The death toll rose above 50 early Monday from the deadly attack by a gunman who fired round after round from a 32nd-floor room at Las Vegas’ Mandalay Bay Resort and Casino down onto a crowded country music concert across the street.

“We believe it’s a sole actor, a lone-wolf-type actor,” Lombardo told reporters at a 1:30 a.m. news conference Monday. He was later identified as Stephen Paddock of Mesquite, Nevada.

The shooting occurred shortly after 10 p.m. Sunday during country music star Jason Aldean’s performance at the three-day Route 91 Harvest festival, held in a lot across Las Vegas Boulevard from the hotel.

Fans dove to the ground and took cover, trying to protect themselves as bullets flew through the air from the higher vantage point.

“Tonight has been beyond horrific,” Aldean wrote on Instagram just hours after the deadly attack. “My Thoughts and prayers go out to everyone involved tonight. It hurts my heart that this would happen to anyone who was just coming out to enjoy what should have been a fun night.”