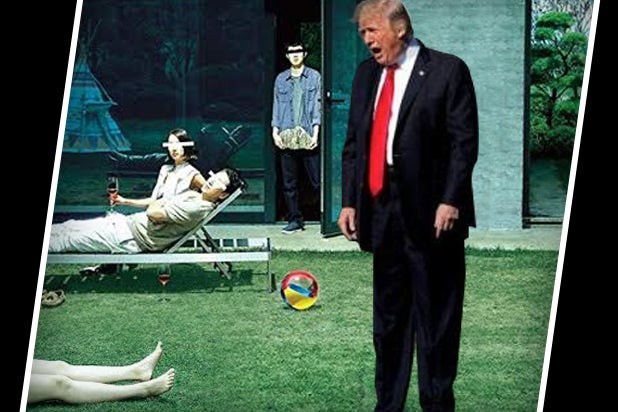 In the middle of a rant during a rally in Colorado Springs on Thursday, President Trump, for some reason, took a detour into the movie business in order to complain that the South Korean satire “Parasite” won the Oscar for Best Picture instead of an American film.

Also, for some reason, he called the award “best movie of the year” and appeared to suggest that Oscar voting is a matter of national trade policy.

“By the way, how bad were the Academy Awards? And the winner is a movie from South Korea,” said Trump. “What the hell was that all about? We got enough problems with South Korea with trade. On top of it, they give him the best movie of the year? Was it good? I don’t know. Can we get ‘Gone With the Wind’ back please? ‘Sunset Boulevard.’ So many great movies, the winner is from South Korea. I thought it was best foreign film, right? Best foreign movie. No! Did this ever happen before?”

Trump also insulted Brad Pitt, calling the “Once Upon a Time… in Hollywood” Oscar winner “a little wiseguy.” No, we don’t know what that means either.

Neon’s succinct dis referred to the fact that “Parasite” is subtitled, something director Bong Joon Ho joked during the Golden Globes is the “one-inch barrier” audiences need to overcome. After his film’s impressive four Oscar wins, which also included Best Director and Best Original Screenplay, Bong said he realized that audiences may already have.

“I feel like I was already a little late. People already were overcoming these barriers, from streaming services, YouTube, social media. And in the environment that we’re currently living in, I feel we’re all connected,” Bong said. “So naturally, I feel we will come to a day when a foreign language film or not, it doesn’t matter. A foreign language film like this won’t be much of an issue hopefully.”

But, at least as far as Neon sees it, apparently Trump still hasn’t.

That said, to answer his question, this actually hasn’t happened before. “Parasite” is the first non-English language film to win Best Picture at the Oscars. Now you know!

TRUMP: "By the way, how bad where the Academy Awards this year? [Booing] 'And the winner is a movie from South Korea!' What was that all about? We got enough problems with South Korea out with trade."